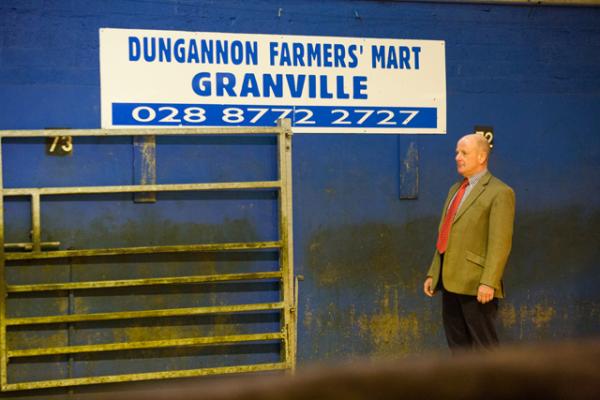 A fantastic turnout of calves and yearlings were forward at Dungannon Farmers Mart on Saturday 22nd November for the NI Aberdeen-Angus Club’s Annual Calf, Yearling and Young Handlers Show. 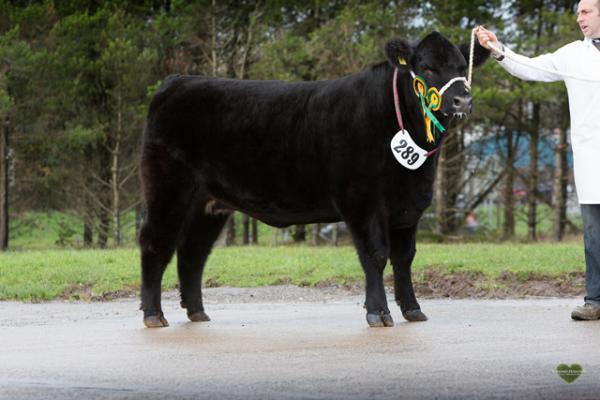 This Nightingale Playfair K527 daughter is out of the Blackhaugh Easy papa G782 daughter Lana Lady Happy K647. This one was champion calf at last year’s show and was a first prize winner at Enniskillen Show this year and is due to calve in March to the home bred sire Lana Knight N476.

Securing the reserve yearling heifer championship was Tommy Jackson, Saintfield, with Ashvale Blackbird N633. Born September 2013, this one was bred by the McKeown family and is the first foundation female to be purchased for Tommy’s herd. She’s by Eden Vale Black Magic K275 and is out of the Woodvale Roscoe Y054 daughter Ashvale Blackbird C674. This one was in the able hands of show man Allen Shortt and will likely make an appearance at Balmoral next year with plans then to flush her. 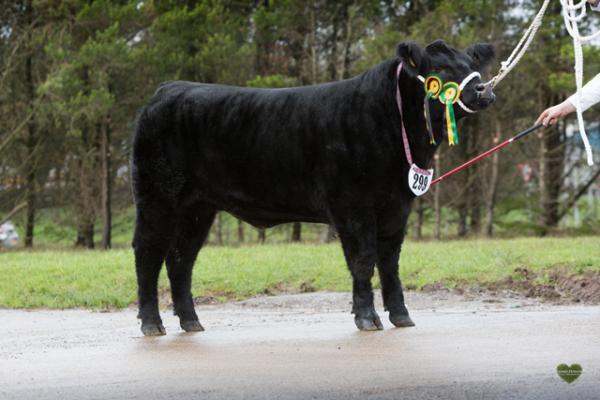 Then in the yearling bull championship, top place went to Co Fermanagh-based Fintan Keown with the July 2013-born Home Farm Evan N594. By Spangager Tommy Boy, he’s out of the Nakkeg Nord 913 daughter Home Farm Ebony Swinger G393, just one of the three cows that make up the Home Farm herd. He has won tickets at Omagh, Clogher and Fermanagh Shows this year and will be forward for sale in February. 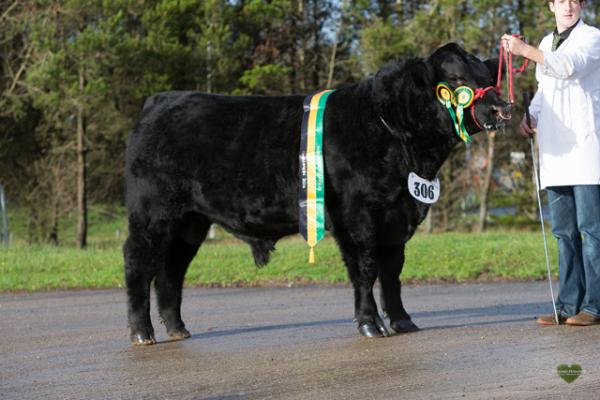 Standing reserve to him and adding to a strong prize haul on the day was Portadown-based Sam and Sarah Matchett’s October 2013-born Rosscarberry Lord Harvey N934. This was the first time out in Northern Ireland for this bull, which is by the Matchett’s stock bull Carrigroe Fred. He’s been shown successfully in the South and was purchased as an additional junior sire earlier in the year. 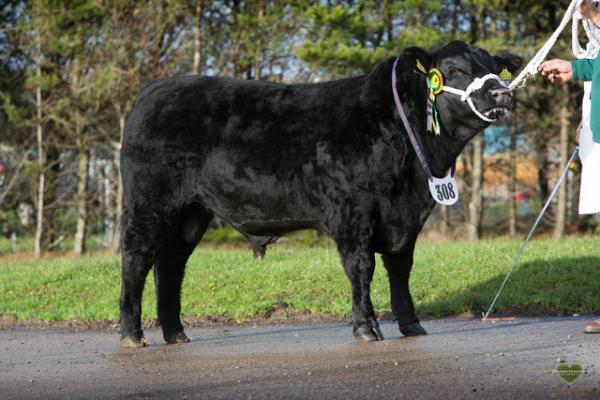 The Matchett family then reigned supreme by scooping both the champion and reserve champion tickets in the heifer calf championship. Going one better than her herd mate was Birches Lady Jane P446, an April 2014-born daughter of Bunlahy Philip K248, a bull used for one year in the Birches herd. She’s out of Birches Lady Jane L912, making her a grand daughter of the successful show cow Carrigroe D Lady Jane. 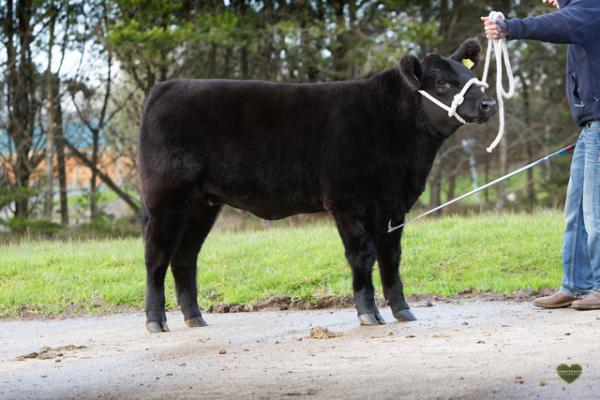 Reserve to her was her half sister, Birches Lipstick P435. Again by Philip, this March 2014 heifer is out of the Lissard Mark daughter Drumcrow Lima G266. She stood second in the class for the brother and sister team who alongside parents Nigel and Gail run 16 breeding females in the herd. Securing the bull calf and overall calf championship was Adam Armour at the halter of parents Alwyn and Carol Armour’s March 2014-born Woodvale Kool Jaguar P633. By the homebred Woodvale Lord Jaguar M455, he’s out of Friarstown Kinannie H076, herself a S A V Net Worth 4200 daughter. This bull was calf champion at Clogher Valley Show, as well as a first prize winner at Castlewellan and was also named best bull calf in the 2014 NI Club herd competition for the Dromora-based herd. 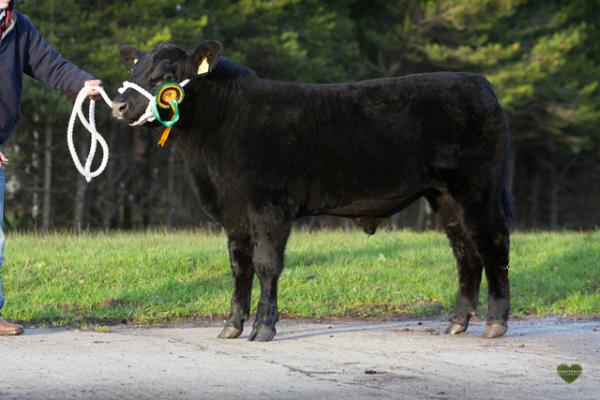 Completing a great day for the Matchett family, they won the championship pairs class, with Colin White standing reserve and then stood reserve champion commercial with their Aberdeen-Angus cross heifer Sophie, by Bunlahy Philip K248. 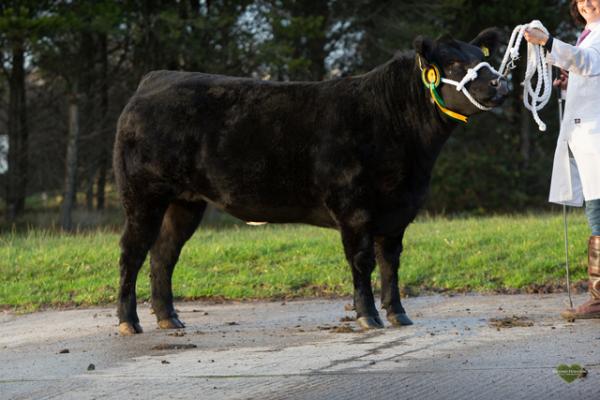 Winning the commercial championship was Banbridge, based Freddie Davidson with his Old Glenort Earl K632 sired steer Earl, out of a first calving Limousin cross heifer. Commenting after his judging stint, Mr McGillivray said: “It was an honour to be asked to judge this great event and the quality was strong throughout. Congratulations to all exhibitors, particularly the championship winners who brought fantastic calves and yearlings out in front of me.”

Winner of the junior young handler class was 14-year old Sam Matchett of the Portadown-based Birches herd. Sam has won this class previously and was a first prize winner at this year’s Youth Development Final in Northern Ireland. 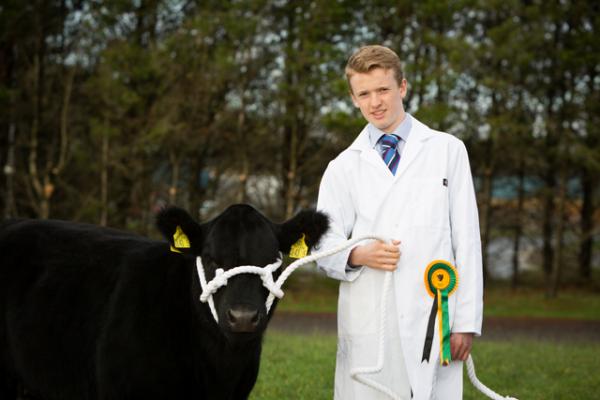 Then winning the intermediate class was 18-year old Adam Armour of the Woodvale herd, Dromora. This is the second year Adam has been showing and is now at home working on the family farm. 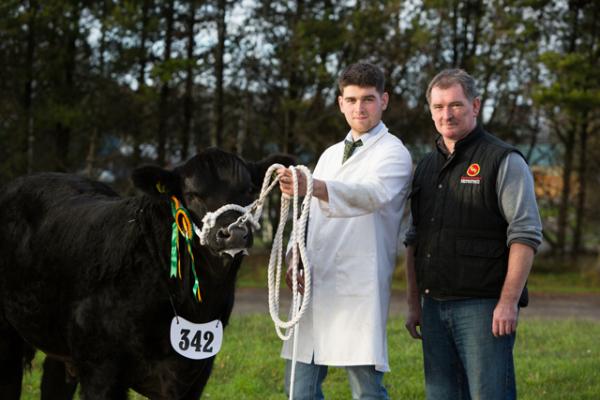 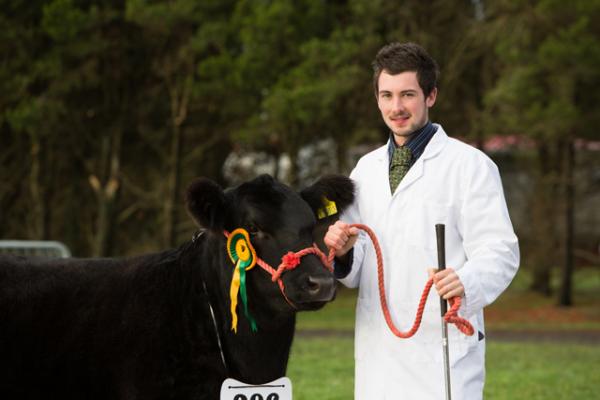 Winning the futurity heifer class for a heifer born in 2012 with first natural calf at foot was Neville Forsythe with Coltrim Evana M367. By the Hoff Limited Edition son Curragh David J513, she’s out of the Wedderlie Net Profit E916 daughter Coltrim Evana K516. This was the first time shown for Evana and was shown with her October-born bull calf at foot by the herd stock bull Wedderlie Ergo M574, purchased in Stirling two years ago.

Standing first in the intermediate yearling heifer class was Sam and Sarah Matchett’s Birches Lady Holly N391. Born July 2013, this is another by the previous herd sire Bunlahy Philip K248 and was shown at the foot of successful show cow Mogeely Lady Hilda H967 and was a class winner at Lurgan Show. Winner of the senior heifer calf class was Alan Cheney with Lana Jana Erica P767. Shown on her first outing, this Nigtingale Playfair K527 daughter is out of the Mosston Muir Lord Ronaldo B044 daughter Lana Juana Erica H043, herself calf champion at Dungannon in 2008. 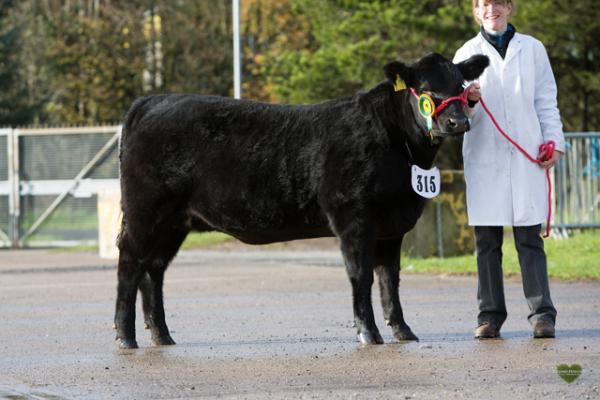 Meanwhile, securing the top place in the junior/baby heifer class was the Armour family with the May 2014-born Woodvale Nelamerica P714. By Woodvale Lord Jaguar M445, she’s out of the Woodvale Kool Papa K062 daughter Woodvale Nelamerica M147. This one has been shown at the foot of her dam where together they won champion at Newry and Clogher Valley and Castlewellan Show this year. Standing top of the line in the senior bull calf class was Enniskillen-based Stanley Smith with Allwood Perry P342, a January 2014-born Rawburn Rommel E423 son out of the Fordel Eisenhower Y423 daughter Allwood Pringles J272. It was a first time outing for this bull calf, but he made it a hat trick of wins for Stanley in this class with the help of Alan Morrison who showed him. 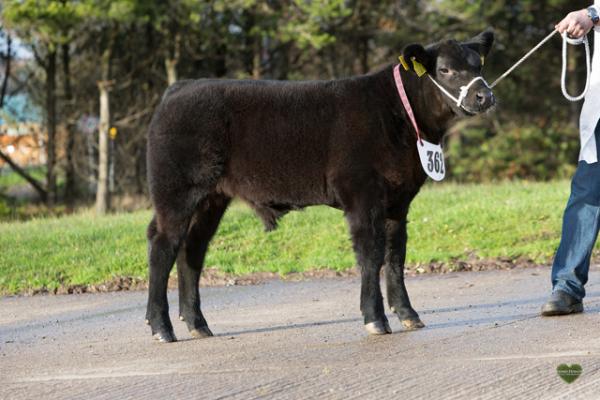