The Cheeklaw herd dispersal will be taking place on Monday the 23rd at the October Stirling bull sales. We recently caught up with Sian Sharp, daughter of David and Chrissie Lucas, who together own the Cheeklaw Herd. It was great to get an insight in to the background and performance of the Cheeklaw herd and the decision to retire in the lead up to the dispersal in October. Read the full piece here: http://www.aberdeen-angus.co.uk/news/feature-cheeklaw-herd/

We are very much looking forward to the final this Saturday! Over the past week, we have been sharing the profiles for our judging panel line up. This year John McEnroe will be the showmanship judge, Marie Louise Ryan will judge the stock judging, clipping and dressing will be judged by Mark Philips and Alistair Cormack and then finally our senior panel interview judges will be Alex Sanger, Aileen McFadzean and Philip Halhead. We would like to wish all the finalists the best of luck for this weekend.

We also managed to catch up with Stephanie Dick, who won the senior title in 2015. It was great to learn more about how Stephanie benefitted from the Youth Development Programme and her study trip to the USA, which she won alongside her 2015 title. We would also like to thank Stephanie in advance for the provision of cattle for the final from her own Stephick pedigree Aberdeen-Angus herd. Read the full piece here: http://www.aberdeen-angus.co.uk/news/study-trip-to-the-usa-stephanie-dick/.

Image: Stephanie Dick in the showring

Another reminder that it isn’t too late to buy a raffle ticket. All proceeds will go to the Youth Development Programme. It is a great chance to support the thriving programme and also be in with the chance of winning some great prizes. Angela McGregor is donating a heifer from her own Newcairne herd – read more about why Angela thinks it is so important to support the programme and also to find out a little bit more about the heifer up for grabs: http://www.aberdeen-angus.co.uk/news/angela-mcgregor-the-ydp-and-my-donation-to-the-raffle/

Image: One of the Newcairne heifers, up for grabs in the YDP raffle

The Irish Aberdeen–Angus Association were out in force at The National Ploughing Championships at Screggan, Tullamore, County Offaly this week. The stand went down a treat and was very busy for the duration of the 3-day event, with an excellent show of breeding and feeding cattle generating a lot of interest amongst attendees. The weather was glorious on the first day for all 112,000 people who attended the event, but the predicted rain came lashing down on day two, however it never managed to dampen spirits! There was fantastic hospitality in the caravan, and we’d like to say a huge well done to all who manned the stand, provided the cattle and made this momentous event happen.

Irish Rugby Union player Rory Best OBE even made the point of coming onto the stand at the event, and was kind enough to stop for a photograph with a selection of 4th year agricultural students who’ve kindly allowed us to share the photograph. Thank you to the girls, and a thank you is extended to Rory who is always so accommodating when stopping to chat or for a photograph. Society President Alex Sanger also attended the Ploughing Championship and has said ‘’I thoroughly enjoyed my time over at the Championship. I’d like to thank all of our committed members who helped man the stand and set up the stands and displays, while also thanking the exhibitors of a very strong display of excellent cattle. I must also thank Kathryn Bradshaw and the great team who were always on hand with refreshments available, being great hosts throughout.’’ 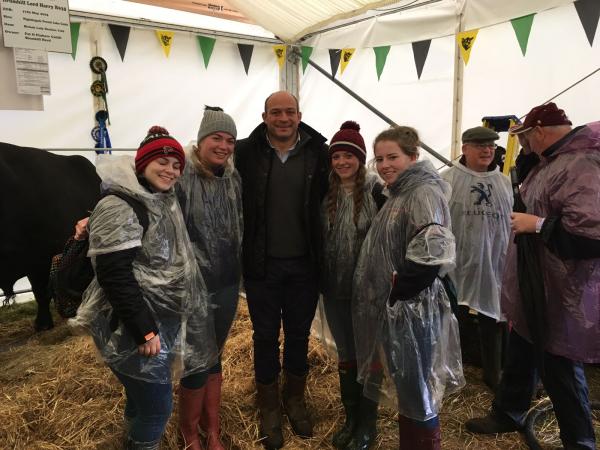 The Ribble Aberdeen-Angus Herd dispersal will be taking place on 11th November at CCM Skipton, with 400+ head of cattle. Prior to the dispersal, the Herd will be holding an Open Day this weekend on Saturday 23rd September, which we’d encourage you to all get involved in if you can make it! You can contact Henry Rowntree of the Ribble Herd on 07886 222062, should you require further information.

This week’s show and sale of Aberdeen-Angus & Native bred Cattle held at Thainstone Centre was sponsored by the Society and it saw R Flett & Co come out on top, with overall champion going to the 19 month old 668kg bullock for £1,550 (232p per kg) to G Reid, Mill of Haulkerton, Laurencekirk. On the day, Aberdeen-Angus bulls averaged 224.2p and heifers averaged 202.5p. The leading prices were as follows:

We have plenty of upcoming store sales happening throughout the coming months including:

We’d like to acknowledge the print error in this week’s advert that went out surrounding the upcoming Carlisle Bull Sale. The advert stated that the event took place on Monday 29th September, when it is of course Friday 29th September. Please accept our apologies for any confusion caused.

We hope you all have a great weekend and look forward to hearing all the stories next week and keeping you posted with more news and results!