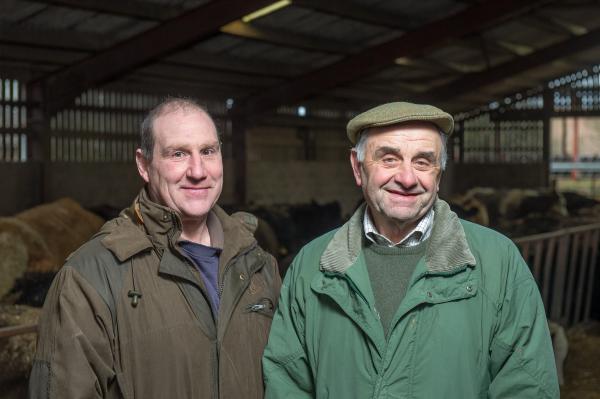 Making ends meet in an era of not only reduced commodity prices, but also ever declining financial support, is no easy task, however by breeding home-bred replacements and improving overall herd health, you can at least significantly curtail input costs.

It’s a policy that Borders farmers, the Fullertons, from Corsbie and East Gordon, Earlston, have been implementing for a number of years and are now consequently reaping the benefits of reduced vet bills and replacement costs, which, coupled with improved herd fertility, is resulting in higher calving percentages, a more compact calving period and more importantly, reduced barren rates.

The family – Jimmy and Liz, eldest son, James his wife Maggie and second son Colin and wife Isabel – have been increasing herd numbers for more than 30 years and by relying more on the Aberdeen-Angus and the Simmental to breed replacements, they now have Aberdeen-Angus x Simmental young bulls finished on mostly home-grown ration. It’s a system that works well for the 420-cow suckler herd which sits at 600-800ft above sea-level.

Initially, herd numbers were built up from buying in Simmental females from the dairy herd, which in previous years would be bulled to various breeds including Aberdeen-Angus, however, having purchased large numbers in the past and struggled with incidences of BVD, the decision was made to improve herd health andbreed as many of their own replacements as possible for this 2300-acre unit which relies upon a further 200 rented acres.

The decision to breed Aberdeen-Angus cross females was an easy one for the family with females of the breed being renowned for their ease of calving and management, coupled with the Aberdeen-Angus premium available for the store and finished progeny.

“We ration the Aberdeen-Angus cows on straw and pot ale syrup for calving in the spring to make sure they don’t get too fat, whereas the Simmental crosses, being that bit bigger, need a silage/straw mix.”

While the best of the heifers of both crosses are retained, spring-born male calves are kept entire to be finished on silage and barley within 12-16 months aiming for 380kg deadweight, while the autumn-born calves of both sexes are cashed at 18-20 months with males to a similar weight and heifers up to 340kg. With 700 acres of cereals, all feeds are home-grown with the exception of dark grains and minerals.

Having eliminated BVD from the herd and joined a health scheme some five years ago, fertility has also improved to such an extent that 2015 witnessed just 12-15 barren cows from this mixed spring:autumn calving herd.

At present, some 90 cows calve outside between September and October, while the remainder calve in spring on straw-bedded courts from the end of March onwards.

The aim is to calve heifers at two-years, with the best of the female calves given extra feeding the following year to ensure they are still able to rear their calf, grow and come to the bull to produce a second calf 365 days later.

Spring calving cows and heifers are allowed to calve in their various collective pens and are then penned individually with their calf for a good 24 hours to ensure they are suckled and well enough before they are then transported outside.

Cows join the main herd when they’ve calved their third at which time they are batched either as Simmental or Aberdeen-Angus crosses and in lots of 35-40 cows, therefore, enabling them to be bulled either to an Aberdeen-Angus and Simmental bull, respectively in individual fields.

The suckler herd runs alongside 1200 commercial breeding ewes, all of which are lambing inside at the end of March onwards.