Honours were evenly spread out at the 20th Black Beauty Bonanza which attracted an outstanding entry of more than 100 Aberdeen-Angus calves and yearlings from 30 herds from Clachmannan to Ross-shire.

Organised by the North East Aberdeen-Angus Club, with Glenrinnes Estate, Dufftown, as main sponsor, the show was widely viewed by the large ringside audience as the best in the 20 years of the event and drew warm praise from the judge, Rob Bishop, owner of the noted Warrenho herd in Berkshire.

“It’s a fantastic well-organised show and the top bulls, displaying style and breed character along with conformation and good tops, will go on and do well at the bull sales,” said Mr Bishop. “The heifers, although sometimes not the biggest, were very correct and a credit to the breed.”

Yearling bulls were topped by the 20 month old, Logie Dynamite T740, a well-grown son of Logie Electric P438, from AJR Farms, Mains of Collieston, Ellon, who acquired the Logie herd from the Bruce family last year, retaining Andrew and James Reid as cattlemen.

Reserve, and again the second prize winner in the class, was the January-born, Retties Evita U005, by Retties JFK M195, shown by Richard and Carol Rettie, Devonside, Clackmannanshire, from their herd at Methven, Perth.

The Rettie’s had a successful day, bringing out the yearling heifer and reserve champions from their livery, on behalf of Donald Rankin, Kilmaluag, Duntulm, Isle of Skye, who took top honours with the 18 month old, Kilmaluag Lady Ruth T207, another by Retties JFK M195, with reserve spot going to the furthest travelled exhibitor, Richard Hassel, of Brailes Livestock in Oxford – though all his cattle are kept in Scotland – with the 18 month old, Cheeklaw Black Beath T597, by Balmachie Lord Jack R198, bought at the Cheeklaw dispersal. 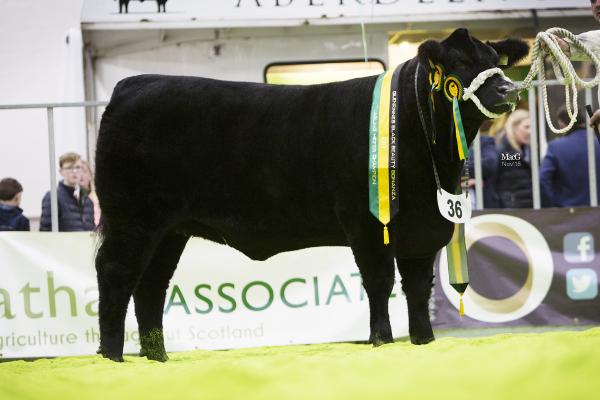 The new award for herds of 20 cows or fewer founded within the last five years went to Moray farmer and vet, Hugh Thomson and his wife, Cara, whose class placings included a red ticket with the April-born heifer calf, Tynet Diana U041, by Gretnahouse Blacksmith L500.

« Go back
This website uses cookies to ensure that we give you the best experience on our website.Accept Read More Reject
Review cookie consent
Necessary Always Enabled