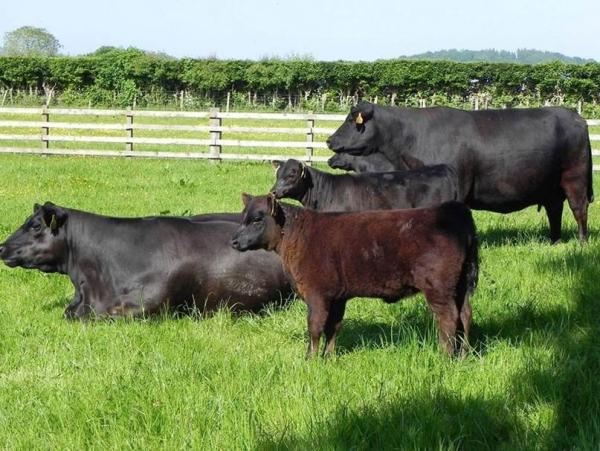 Having established the Dunlouise herd of Native Angus cattle in 1995, Geordie and Julia Soutar and son and daughter, Duncan and Louise, are currently gearing up for a Celebration Sale of females, calves, young bulls and embryos, to be staged on farm at Kingston, Forfar, Monday 26th June at 1.30 pm – the first of its kind in over 50 years.

The sale, which sees United Auctions officiating as official auctioneers and the Angus Hall of Fame from the USA producing the unique catalogue, is expected to attract an incredible worldwide interest, all built on the Soutar family’s many international contacts and the spread of Dunlouise genetics across the world.

Having started with two foundation females, one of which was Karen of Boghall, the couple decided early on that Native Angus had a great deal of appeal, with their distinctive style.

“We then bought Ejeta of Templehouse the following year, with all of our Ericas descending from this original cow,” explains Geordie.

The great adventure of breeding these famous families resulted in it taking more than 10 years to acquire all the nine Native cow families now left in existence, a stark difference from the 1960s when there were 98 cow families, he adds.

Bob Anderson, past secretary of the Aberdeen-Angus Cattle Society, was an enthusiastic helper and compiled a list of Native Angus left in existence in the UK. These cow families, even after all this time, retain distinctive features, such as a ‘Jipsey head’ and a set of ‘Cherry Blossom ears’.

The Cherry Blossoms – Cherry Bee 117 – bred three of the sires that Genex CRI bought a third semen interest in and proceeded to send this Native semen to every country in the world that breeds Angus. In addition, Native heifers from all Dunlouise cow families have been sold throughout Europe, but particularly into Germany where it is more common to breed Angus “from field to fork”, selling their packs of Angus beef direct to the public.

The Soutar family has sold embryos to North and South America, Australia and Sweden, while at the same time working hard to keep the genetic gene pool wide so customers have a broad base to work from. “Our recent find of several other cow families, through the male line, trace back to families like the Georgina and Lady Haddo lines,” explains Julia.

On the sire front Dunlouise Jipsey Earl is internationally the most successful UK bred bull ever and is a Path Finder sire in America, the only UK bull ever awarded this status, explains Geordie. “The data for this is submitted by ranchers who have used his semen, not by us the breeder, culminating in Jipsey Earl earning an impressive milk EPD of + 42 in the States, ranking him in the top 1% among 23,448 current sires, by measuring the productivity of his daughters.”

A further six bulls have third share semen interests sold to Genex CRI, one of the premier semen companies in the world, giving the Dunlouise herd further international recognition. “We have also enjoyed a fruitful partnership with the Sinclair Cattle Company in America, establishing a joint herd of Native Angus cattle through the export of embryos,” adds Geordie.

In 2004 John Roberts, founder of Multiplex, the building giant behind the Telstar Stadium in Sydney and the Wembley Stadium in London, paid Geordie and Julia a visit in his helicopter, purchasing 36 embryos to establish his Native Angus herd in Australia. That same year the couple sold a heifer to the Junck family of Vornagelhof Angus in Germany, in preparation for the lifting of the export ban. “Peter was the last breeder in Germany to import from the UK in 1989 and wanted to be the first to import again after the lifting of the ban,” comments Julia. Rainer Mohl in Bavaria has a complete herd of Native Angus genetics.

But it’s not just about historic sale success, as an exciting project is currently underway in Uruguay using a selection of Dunlouise Native semen. Dr Guillermo Da Nava bought 1500 units of semen for trial work in several herds and feedback has been extremely positive and as a result the Soutars now look forward to concentrating their efforts on breeding Native bulls from new bloodlines for further use in Uruguay and elsewhere.

“Despite the difficulties of importing into Argentina, we have also helped a breeder establish a Native herd just outside Buenos Aires. We’re currently putting together an order of Dunlouise Jipsey Earl semen for the Narbaitz family who own CABA semen station in Argentina,” adds Geordie.

The couple have also been working alongside Graham and Bettan of Yxskaftkälens Angus in Sweden and last year exported 38 embryos. “As a result of an Open Day of their farm in Sweden, a large consignment of Native semen was sold to Estonia to moderate extreme cows and add fleshing ability.

So, from the frozen North of Sweden to the dry heats of Australia, these cattle work in many extreme conditions. “Our lines are also present in the South American tropics of Columbia to the hills of Northern Montana,” adds Julia.

The management ethos at Dunlouise is relatively simple, with a “back to basics” approach, Geordie explains: “A simple grass based diet is supplemented by turnips and hay in the winter. Calves aren’t fed creep at grass so we can assess the cow’s milking ability. We have a grass mixture specific to the farm where we incorporate three clovers, one early, one mid and one late maturing.”

All stock are sold off the farm with the couple choosing not to show to minimize health risk. “Cattle are not vaccinated so they are exportable and any young males deemed not suitable for breeding are castrated and sold as grass fed steers to MacDonald Bros Butchers, Perthshire.

The historic Celebration Sale on Monday 26th June will see the Soutar family offer in the region of 20 young heifers, 20 in calf heifers, eight young cows and or heifers with calves at foot, and will be a mix of proven home bred sires and new sires. The couple also intend offering five young bulls. All these are exportable to Europe.

Embryos will also be offered from most of the cow families, including some from Dunlouise Cherry Blossom Essie by Jipsey Earl, as well as Dunlouise Ruth by Cortachy Boy and some from Pumpkin by Cup Bearer. These latter 2 are extremely rare cow families.

But in true Soutar family style, not only will the cattle prove to be an admirable attraction, the Soutars have designed their own Dunlouise tartan and items will be available on the day of the sale, including ties, dog collars, pashminas and many more pieces.

“We will also have Angus’ only distillery, Glencadam of Brechin, offering a taste of their products and a chance to buy from their range of superb malts. A third stall will be Gammies of Forfar offering various country wear requirements,” adds Julia. “We look forward to welcoming all interested breeders from across the globe, on a day which will hopefully prove to be yet another chapter in the Dunlouise history books.”