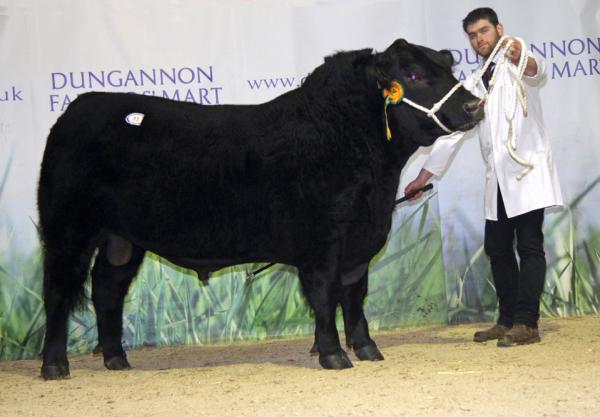 Spirited bidding at Dungannon Farmers Mart yesterday saw a solid sale with a 100% clearance and averages up by more than £600 on the year and a top price of 6200gns.

Suckler herd owners and dairy farmers were out in force, with auctioneer Trevor Wylie confirming that a number of bidders went home empty handed. The 14 bulls on offer met a complete clearance and sold to average £3000 each, representing an increase of £655 on this time last year.

The day’s top bid of 6200gns came late in the sale for Cookstown breeders Jonathan and Lisa Doyle who sold the second placed June 2015-born Drumhill Icebreaker R672. Sired by the herd’s stock bull Blelack Equity J127, a Netherallen Peter Pershore E052 son bought privately from Neil and Graham Massie, this one is out of Friarstown Ideal J126 – purchased as a heifer at the Friarstown reduction sale and dam of the popular Irish-bred AI bull Friarstown Ideal Pete. The Doyle’s established their 40-cow herd eight years ago, and realised 8500gns for a Nightingale Proud Jake 405 son at last week’s breed society sale in Stirling.

The sale leader, with a self replacing index of +52, is in the breed’s top one per cent for milk +23, and top 15% for eye muscle area +5.3. He was snapped up by suckler farmers Robert and Guy Clements for their 50-cow herd based at Beragh, County Tyrone. They finish all calves off the farm and are members of the Aberdeen Angus Quality Beef Scheme.

Next best at 4000gns was the first prize Woodvale Network R854, bred by Alwyn and Carol Armour and sons. This May 2015-born entry is by the herd’s jointly owned stock bull Wedderlie Net Profit E916 and is out of Woodvale Nelmerica M471 – one of 12 cows in the County Down-based herd. He boasts a calving ease figure of +4.0 in the top five per cent of the breed, and sold to Robin Boyd who was bidding on behalf of AI Services (NI) Ltd.

Bushmills breeder Sam McCollum realised 3600gns for the fourth prize Priestland Eddy R567 and 3000gns for the third placed Priestland Vinny R534. Born in March 2015 they are both sons of herd sire Tonley Palacios K715 ET. The Priestland Herd dates back to 1954 and currently comprises of 12 pedigree cows.

Judge Pat Cahill from the 40-cow Shankill herd in County Cavan awarded the male championship to Coolermoney Ronaldo R563, a September 2015-born Netherton Mr Brazilian E377 son bred by father and son Adrian and Graeme Parke, Strabane. His dam is the Nakkeg Nord 913 daughter, Coolermoney Rachel K051- one of seven cows in the herd and a former calf champion and yearling heifer champion at the NI Aberdeen Angus Club’s annual calf show. Coolermoney Ronaldo secured the senior championship at the Balmoral Pedigree Calf Fair in November. He attracted a bid of 2900gns from Oliver McKeown from Ballynahinch, County Down.

Runner-up in the male championship line-up was the March 2015-born Island Farm Flannigan R213 bred by Kevin McOscar who founded his 10-cow herd four years ago. This second prize winner was sired by stock bull Glenbuchat Edgar M324 and is out of Glenbuchat Fearn M345 – purchased at the herd dispersal in Stirling. He was the first lot into the salering and sold for 2300gns to R Stewart from Toomebridge. 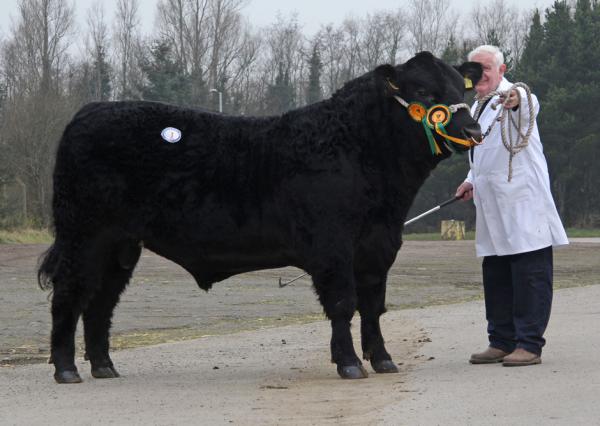 Female champion Drumlone Esther R776 sold at 2200gns for Kenneth Veitch from Lisbellaw. Sired by Blelack Egotist K531, she is out of the Highland Colossal 101E daughter Drumlone Essy G702. This heifer was bought as a foundation female for Gareth Sproule’s Ardbarron Herd in Castlederg.