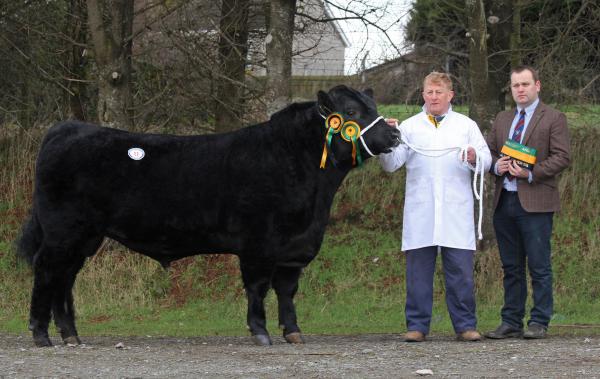 Aberdeen-Angus bulls reached a top price of of 3000gns at the Society’s February show and sale hosted by Dungannon Farmers’ Mart on Tuesday. Auctioneer Trevor Wylie described trade as selective. “Stronger bulls with good conformation attracted a ready market from dairy and suckler herd owners, while the plainer lots were harder to sell.”

Sale leader at 3000gns was Kiltariff Darius P687 (pictured above), a May 2014 born Haymount Willinger K992 son bred by Kenneth Bready, Rathfriland, Co Down. His dam is the Black Banner X1 of Idvies daughter Kiltariff Diana C604 – one of 12 cows in the herd. This fourth prize winner has a Self Replacing Index of +41 and sold to dairy farmers Riddell Murphy and son Timothy, from Derrynoose, Co Armagh.

Next best at 2500gns was the third placed Coolermoney Rochester P434, a Coneyisland Legend E112 son bred by Adrian and Graeme Parke, Strabane, Co Tyrone. This May 2014-born entry is out of a home-bred Idvies Paris B102 daughter and sold to Gary Young from Castlederg, Co Tyrone.

Freddie Davidson, Banbridge, Co Down, realised 2200gns for the male champion Ember Lord Jack P956. Born in May 2014, this one has a Self Replacing Index of +37 and is by Blelack Duke J262. He’s out of a Lissard Mark daughter carrying the Drumcrow prefix. Buyers were Messrs W T and W A McKinney from Maghera, Co Londonderry.

Judge Alan Morrison from the 15-cow Drummeer herd, based at Maguiresbridge, Co Fermanagh, described the male champion as a correct, well balanced bull. “He oozes breed character and has a good shoulder and nice spring of rib.”

Claiming the day’s reserve male championship was Drumlone Evermore P527 bred by Kenny Veitch, Lisbellaw, Co Fermanagh. At 15-months-old he was the youngest bull in the catalogue and is by Rawburn Black Hawk L261. This one failed to meet his reserve and was unsold. 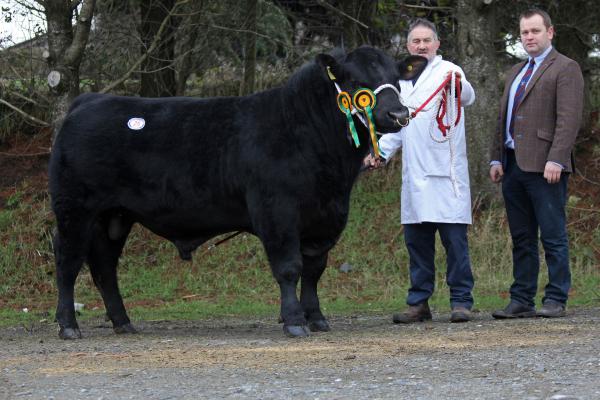 Females peaked at 2500gns twice, the first of which was the October 2014-born Drumlone Eldor P203, again from Kenny Veitch. Sired by Rawburn Double OSeven J985, she is out of a home-bred dam by Penguin Enterprise J380. Buyer was J Ferguson, Ballygawley, Co Tyrone. Following at the same money was the reserve female champion, Drumhill Eston Anne P296, from Jonathan and Lisa Doyle, Cookstown, Co Tyrone. Born in May 2104, she is sired by the herd’s 11,000gns stock bull Blelack Lord Handsome L739 and is out of a Hoffs Limited Edition SC 594 daughter carrying the Friarstown prefix. This one was snapped up by J Martin, Ballynahinch, Co Down. 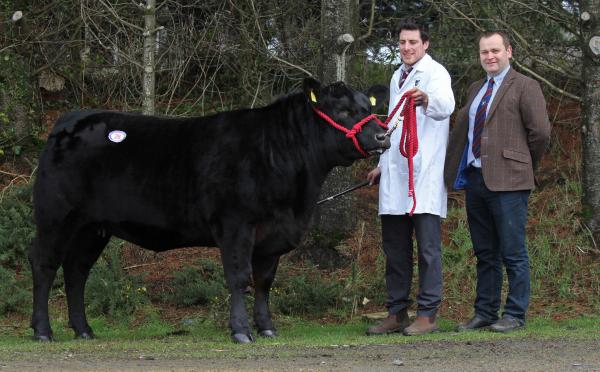