A small entry of bulls reached a top price of 3100gns at the Aberdeen-Angus Cattle Society’s Dungannon show and sale on Tuesday this week.

Sired by Penguin Jock G296, he is out of the Haymount Wurz F676 daughter Penguin Annie K427 – bought privately to establish the herd in 2013. John and Joe Conlon own three pedigree Aberdeen-Angus females which are managed alongside a herd of 35 Hereford cows.

This 17-month-old bull came under the hammer of auctioneer Trevor Wylie, selling to ABCD Farms Ltd based at Beragh, County Tyrone.

The husband and wife team of Alan and Lana Cheney, Trillick, County Tyrone, scooped the male and supreme overall championship ribbons with the 23-month-old Lana Mizzle P911. With a self replacing index of +44, he is by the herd’s stock bull Blackhaugh Easy Papa G728 and is out of a home-bred dam by the noted Rawburn Transformer. In the breed’s top 1% for daughter calving ease +6.7, he sold for 2800gns to W Brownlee, Loughgall, County Armagh.

Judge Alwyn Armour from the Woodvale herd based at Dromara, described the supreme champion as a long bull, with great width and excellent muscle.

Next best at 2300gns was the second placed Coolermoney Ricardo P423 bred by Adrian Parke and son Graeme, from Strabane, County Tyrone. This 23-month-old bull is sired by the three times All-Ireland Aberdeen-Angus champion Rosemead Karona J957 and is out of the Coneyisland Legend daughter, Coolermoney Rosita J003. Buyer was A McMaster from Kircubbin, County Down.

The Matchett family – Nigel, Gail, Sarah and Sam from Portadown, County Armagh, claimed the reserve male championship award with the 14-month-old Birches PridenJoy R656. Sired by Aynho Rossiter Eric B125, he is out of the Cashelane Bowie daughter, Carrigroe D Patsy – one of 18 cows in the herd. This bull was reserve junior champion at the inaugural Pedigree Calf Fair at Balmoral. 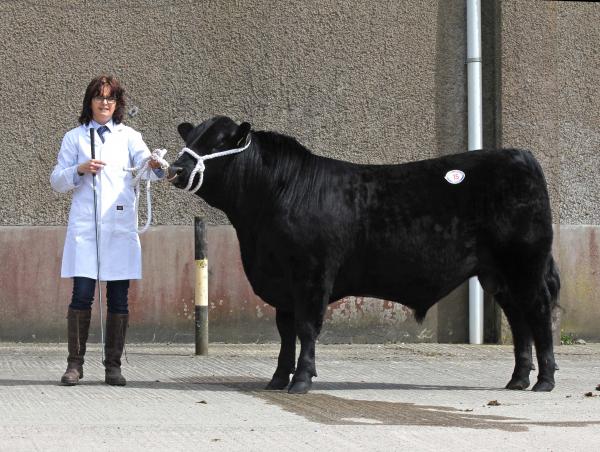 “The reserve champion is a young bull with great breed character, a good carcass, and sound legs and feet,” added the judge.

Aberdeen-Angus females peaked at 2400gns, paid to Adrian Richardson, Maguiresbridge, County Fermanagh, for the six-year-old cow Hillview Pretty Kelso K057. Sired by Coneyisland Legend E112, she is out of the Castle of Mey Elscot daughter, Idvies Proud Irene A060. Included in the deal was her two-month-old Dalrene Cruz 11F bull calf. Buyer was M McKenna from Maghera, County Londonderry.

The Cheney duo also scooped the female and reserve supreme championship awards with the 13-month-old heifer Lana Peneloplay R121. She is by Nightingale Playfair K527 and is out of a home-bred dam by Blackhaugh Easy Papa G728. This one failed to meet her reserve and was withdrawn unsold.

Results from the show ring: