Double success for Aberdeen-Angus at the Premier Meat Exhibition 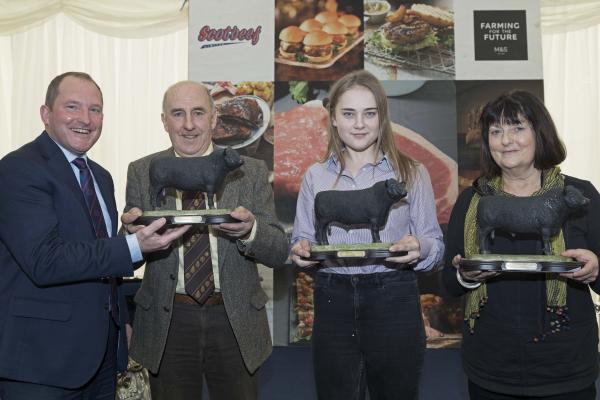 It was a black white-wash at the Scottish National Fatstock Club’s Premier Meat Exhibition at Scotbeef, Bridge of Allan, where Aberdeen-Angus swept the boards to take both championship and reserve in the UK’s premier beef carcase show, which attracted an entry of more than 300 from farms throughout Scotland and the North of England.

The annual exhibition, organised in conjunction with leading meat processors, Scotbeef, major suppliers of beef and lamb to Marks and Spencer (M&S), attracted an entry of more than 300 from farms across Scotland and the North of England.

Winner of the coveted Scotbeef Silver Steer trophy for the champion and £1000 cash prize was an Orkney-bred Aberdeen-Angus heifer from leading Aberdeenshire producers, Alan and Gavin Ross, of Ross Brothers, who run a large-scale beef and lamb finishing enterprise from Wardhead, Strichen.

Bred by James Ritch and daughter, Alison, at Keirfold Farm, Sandwick, in Orkney West Mainland, the heifer was earlier placed third in the live cattle judging at Caledonian Mart, Stirling. Sired by Auchincrieve Excalibur N671, bought at a Thainstone bull sale for 5000gns, and out of an Aberdeen-Angus cross cow, the champion killed out at 60.6% to produce a 394.1kg carcase which classified U+4L.

To crown a successful day, Ross Brothers were also named winners of the award for the producer supplying the highest percentage of cattle to meet the M&S carcase spec over the last year, achieving a percentage of 98%.

“This is almost as important as winning the championship,” said Gavin Ross, who runs the Ross Brothers business with his father, Alan. “It means we are producing the right cattle for the market place, which is becoming ever more important.

“We as producers are rewarded with a premium price for delivering in spec cattle but it means a price deduction if you are out of spec which we can’t afford in these difficult times for the beef industry.”

Mr Ross said he was “over the moon” to win the championship at only his second attempt.

“It’s a great honour to win in competition with all the best cattle from top producers across Scotland and the North of England and it’s something we might never achieve again,” he said.

The Ross family are buyers of store cattle and lambs at virtually every market in Scotland for their large-scale beef and lamb finishing business. Cattle are finished on a diet of home-grown silage and bruised barley along with Harbro’s protein supplement, Beefstock. Mr Ross paid tribute to Harbro sales director, David Mackenzie, who advises on rations for their beef and sheep finishing enterprises.

And it was an Aberdeen-Angus steer, placed second in the live judging, which took the reserve carcase championship for Andrew Purdon and Partners, Stravenhouse, Law, Carluke, who also won the Carrick Primestock Shield for the most points in the live and dead judging.

The award for the best pure-bred Aberdeen-Angus went to M and HD Currie, Skewbridge, Mouswald, Dumfries.

The award in Scotbeef’s Aberdeen-Angus beef finishing competition, based on the management of the beef enterprise on the farm judged by Neil Rendall, Holland, Papa Westray, Orkney, the suitability of finished cattle for M&S and assessment of the beef by a tasting panel, went to RG Barbour and Son, Crailing Hall, Jedburgh, with James Rhind, Woodside, Kinloss, Forres, taking reserve and Sjirk and Thyna Oosterhof, Savoch, Lonmay, in third place.

Cover image: Happy smiles from winning exhibitors, Lyndsey and Gavin Ross (right) and son, Stuart (left), who carried off the beef championship with the carcase of an Aberdeen-Angus cross heifer bred by in Orkney by James Ritch and daughter, Emily (centre), with judge, Neil Stoddart (second left).