Collective females hit a top of 11,000gns in Stirling 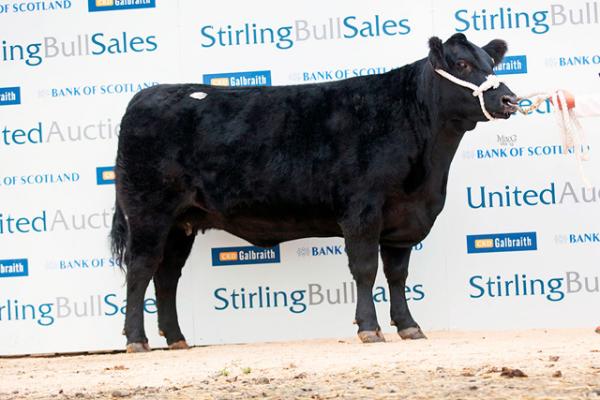 Aberdeen-Angus females were in strong demand this afternoon in Stirling and for the collective offering of show females, production sales and drafts (excluding Weeton sale), trade topped at 11,000gns with 10 lots selling for 5000gns or more.

Then selling to K Rennie, Fife, was Mosston Muir Proud Iona L269, a January 2011-born Lord Forteviot X42 of Tullyfergus. She sold at 4500gns with her heifer calf at foot by Mosston Muir Mr Angus, who later sold for 4800gns to Messrs Munro. This one is a June 2011-born Hoff First Edition son and has been shown successfully over the last couple of years.

The production sale from John Elliot’s Rawburn herd saw a top price of 10,000gns for Rawburn Ebony N666, a March 2013-born Oakchurch Field Marshall K143 daughter out of a home bred Hoff Limited Edition . This one sold in calf and due January to Rawburn Boss Hogg N630 to John Walsh for his Buckhurst herd, Bury, Lancashire.

The next best was a call of 6000gns from the Fraser family of Idvies which secured Rawburn Ellen Erica N778, an April 2013-born Belhaven Beckenbaur K285 daughter out of a Rawburn Lord Ross C216 daughter.

Previous purchaser Keith Rennie then went to 4500gns to purchase Rawburn Ebony N654. This March 2013-born Peter Pershore daughter is out of a home bred Rawburn Randolph F555 daughter and was in calf again to Boss Hogg.

The one female forward from the Haughton herd saw a call of 7000gns from Andrew and Judith Denning secure Haughton Justine Erica L012, a January 2011-born Chapelton Eventer E809 daughter out of Heath House Plato daughter Rosemount Justine Erica B296. This one was  a class winner at the Highland Show this year and was part of the winning interbreed team and was also reserve champion at the National Summer Show in Kelso. Buying this one was Andrew and Judith Denning for their Temple herd, Somerset. Her January 2015-born Halgington Evo L333 daughter, Haughton Justine Erica R132. This one found a new home with Messsrs Hill and Wright, Doncaster.

The best from Alan and Stephen Lawson’s Hallington herd was Halgington Princes K259, who sold for 5800gns to Andrew Hodge for his Rulesmains herd. Born April 2010, this Halgington Knight F123 daughter is out of the Blelack Blacksmith Y291 daughter Blelack Princess C779.

Her herd mate, Hallington Ebolass N425, a July 2013-born Hallington Jenson Eric L307. This one sold having been served to Halgington Wizzard P445 for 4500gns to Ian Colville, Belfast.