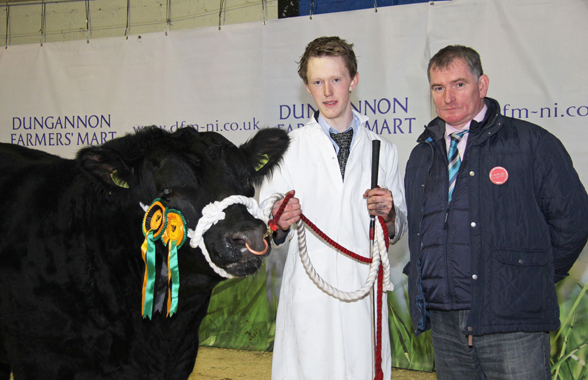 Aberdeen-Angus bulls reached a ceiling of 4400gns at the Society’s show and sale in Dungannon Farmers’ Mart yesterday and saw a 73% clearance with an average of £2390.

Sale leader was the male champion Old Glenort Krank R697 bred by James Porter who runs 60 pedigree cows at the Gill Hall Estate in Dromore, County Down. Born in March 2015, he is by the herd’s 14,000gns stock bull The Moss Quebec K027 and is out of the home-bred Old Glenort Kathleen M704, a daughter of the 20,000gns Eastfield Fusilier D373.

This bull is no stranger to the show ring, having claimed the junior championship ribbons at Balmoral and the breed’s reserve supreme award at Armagh Show.

Judge Trevor Shortt from Strabane described the champion as an easy winner. “This is a powerful bull with tremendous breed character and a super head and really caught my eye when he entered the show ring.”

After spirited bidding auctioneer Trevor Wylie brought the gavel down, selling to Leo Devine from Strabane.

Next best at 2900gns was the reserve male champion Bessiebell Evan R641 from Jack Smyth, Newtownstewart. Sired by the Coneyisland Legend E112 son Cloghogue Evolution, he is out of Cleenagh Gabby, one of only three cows in the herd founded in 2010. This 17-month-old bull is in Breedplan’s top 20% for calving ease +1.5 and sold to Mary Harte, Pomeroy.

James Porter’s breeding was behind the next bull in the form of Old Glenort Vincent R572, which came under the hammer at 2800gns for William Wallace from Dromore. Born in March 2015, he is a son of The Moss Quebec K027 and out of Old Glenort Victoria G346, a dam purchased with this calf at foot from the Old Glenort reduction sale last year. He’s been shown once at Blamoral where he stood second to yesterday’s sale leader. Buyer was William Anderson, Beragh, County Tyrone. 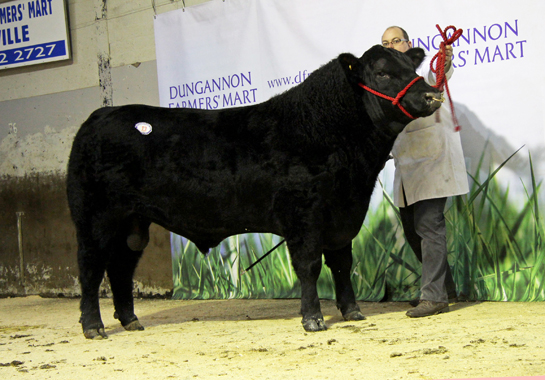 Alan Cheney and wife Lana, from Trillick, realised 2600gns for the fourth placed Lana Lord Hermes R003. With a self replacing index of +41, this January 2015-born Nightingale Playfair K527 son is out of the Blackhaugh Easy Papa G728 daughter Lana Lady Haddo M336. Easy Papa G728 was also behind the breeding of the fourth placed Lana Maximiliano R894. This June 2015 bull sold at 2500gns for the Cheney duo.

Freddie Davidson, Banbridge, secured 2400gns for the first placed Ember Pablo R052. Born in April 2015 he is by former stock bull Birches Lord John M052 and out of Birches Pearl J794, one of 12 cows in the herd. This bull won the intermediate class at last year’s club calf show in Dungannon.

Females topped at 1250gns, paid to John Lawrence, Magherafelt, for the reserve female champion Carmean Evelyn R383. This March 2015-born heifer is by Baronagh Euro A043 and sold in-calf to Weeton Evershed R473.