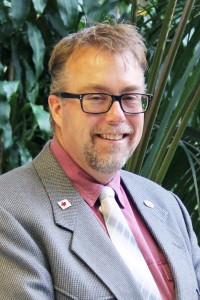 Delegates from all over the world will be attending this year’s World Angus Forum, one of whom is Rob Smith, CEO of the Canadian Angus Association. Rob is part of a family farming operation whose livelihood is 100% based on the marketing of Angus cattle genetics. Rob’s parents took up farming in 1970 with some ‘mixed farming’ activity, with beef cattle as part of that mix. Having started with European Continental cattle and a predominantly British-based commercial herd, it wasn’t until 1994 that the family expanded their operation to include Angus cattle. Over twenty years later, Rob’s family’s entire farming operation is based on Angus cattle.

‘I was originally attracted to Angus cows because of their maternal strength, easy fleshing and generally low-maintenance management. As I researched them more, I learned about the superior carcass quality they possess. So, in the end, I choose Angus because they optimise efficiency and profitability at both ends of the beef value chain.’

When discussing the World Angus Forum and what he was looking forward to the most about it, Rob added:

‘I appreciate seeing my international Angus friends whenever possible, and sharing our successes and progress from all points abroad. Further, I relish the chance to see Angus prospering in various climates and continents of our globe. Finally, to see Angus ‘at home’, in their birthplace? In the motherland? That is a ‘dream come true’ for me.’

As a breed, we are always to try and progress and drive efficiency for breeders all over the world. Rob is very passionate about what the future holds for the breed and where it is likely to go in the near future, stating:

‘I fully believe that Angus will continue to increase market share globally as the world becomes more focused on grilled meat that is optimised by the marbling inherent in Angus genetics. We are also the most efficient cattle, converting low quality forages into premium beef. No other breed of cattle is as sustainable and crosses as well, even with Bos Indicus, as Angus does. We truly raise the ‘global standard’ for beef production, and will continue to do so.’

As a Society, we’d like to extend our deepest thanks to Rob for giving us an insight into what this great breed is doing in this part of the world. We look forward to welcoming Rob and all other attendees to the home of the breed this summer. “Welcome home”!