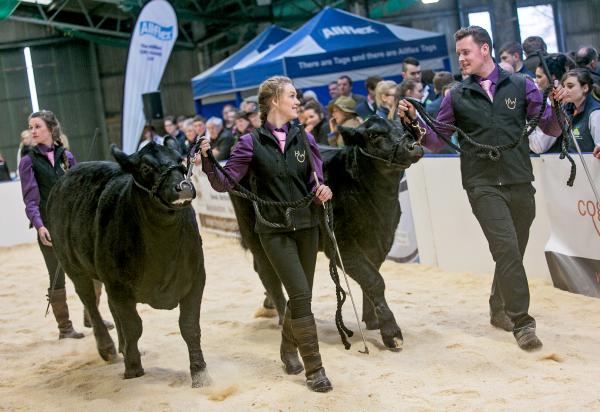 The second National Young Stars event took place at the Three Counties Showgrounds in Malvern, Worcestershire, on the 23rd and 24th March and saw a fantastic display of young, enthusiastic, agricultural talent gather to compete in various challenges including stock judging, a skill-a-thon to test industry general knowledge, marketing and presentation skills, public speaking, clipping and presentation and ringcraft skills.

The event, which was sponsored by the Allflex Group, saw some 18 beef teams took part with competitors having travelled from all corners of the UK, alongside teams competing in sheep, dairy, pig, butcher and auctioneer challenges.

Representing the Aberdeen-Angus breed and finishing runners up in the competition were the Black Beauties team, consisting of Gemma Wark, Mark Wattie and Seonaid McLaren. The team, which was sponsored by Highland Wagyu with cattle loaned to them by Jeremy and Ala Price of the Oakchurch herd, ranked highly through all of the various challenge areas and finished just shy of of the top spot.

Both Mark and Seonaid competed at last year’s event and felt they learnt so much from the event that it was an easy choice to return and compete again for the chance of winning a trip to Toronto, Canada to compete at the Royal Winter Fair. “We worked hard prior to the event getting together at each other’s farms to prepare for the event and practice in various skill sets,” said Seonaid, who works full time in the family’s Netherton herd.

“It’s been a fantastic experience to come back to Malvern and compete. The competition was so tough throughout and the standard had definitely improved in just a year,” said Mark, who runs the Tonley herd in Aberdeenshire alongside father Neil.

Joining the team this year was Gemma Wark of the Idives herd. “I’ve already been fortunate to compete in America when working for a herd out there, so I was keen to get involved for Young Stars this year. It was a fantastic experience working with Mark and Seonaid and the three of us worked well together combining all our strengths as a team. We’d like to congratulate the Limmy Lads on winning the event and are already looking forward to competing next year.”

The team went under the watchful eyes of judges Fraser Cormack, Jim McMillan and Mark Phillips for the clipping and presentation, ringcraft and stockjudging challenges, as well as Ben and Lucinda Nottage who judged the marketing and presentation stand where the Black Beauties team came out on top. Commenting on the team as a whole, Ben said: “This team impressed us on many levels, they’re stand was clearly branded throughout with a strong message of what the team was about. Their overall presentation skills of themselves were impressive and noticeable throughout the event, they’d clearly put a lot of thought in to every individual detail.” 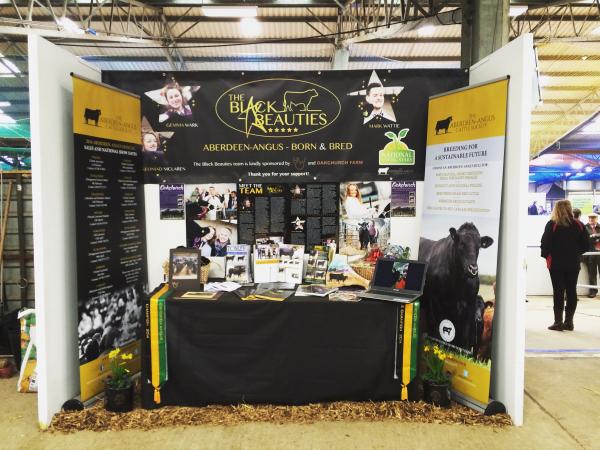 Also flying the flag for the Aberdeen-Angus breed were the Ivomec Super Stars, represented by Robbie Moore, Tom Biela and Maddie Clarke, with cattle loaned by Shadwell Estate who finished 11th overall, while Paul and Kirsty Westaway kindly loaned cattle for Team Canada who were competing in conjunction with the event’s exchange programme that enables the winning beef, dairy and auctioneer to return to Canada in November.

The Society would also like to congratulate the many YDP participants who took part in the event, particularly Andrew Adam who won as part of the Limmy Lads team.