Averages up by more than £660 on last May Carlisle sale 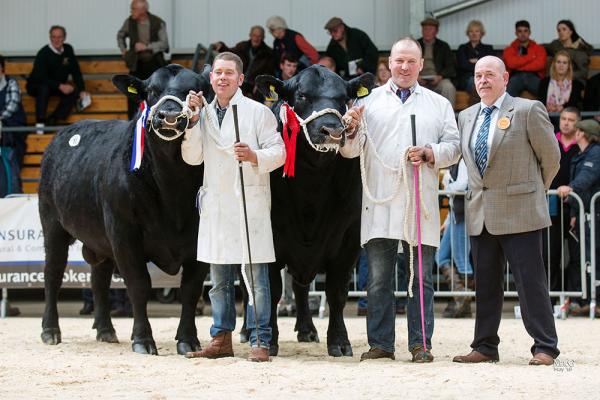 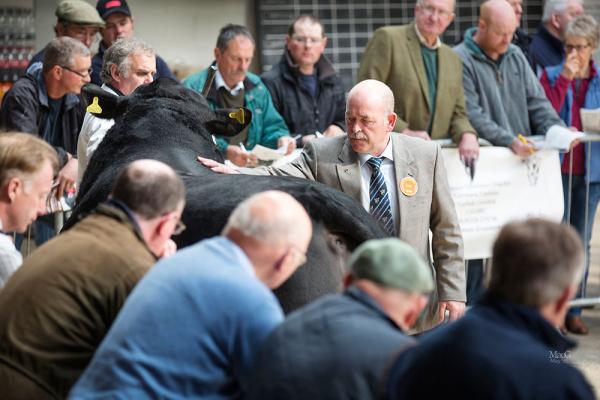 Celebrating a fantastic day in both the show and sale ring was Alasdair Houston of the Gretnahouse herd, Gretna, who took the senior and junior championship honours and top price of the day. His sale leader at 8000gns was Gretnahouse KP P710, a June 2014-born son of the 2013 Winter National Show yearling champion, Gretnahouse Lord Hefty M549 and is out of the Blelack Evor H929 daughter, Gretnahouse Kay Pride M546. KP was awarded the senior and overall championship under judge Alwyn Armour of the Woodvale herd, Dromore, Co Down and sold in a two-way partnership to John Fleming for his Stairhaven herd, Newton Stewart and Ian Watson for the Kersquarter herd, Kelso, Roxburghshire. 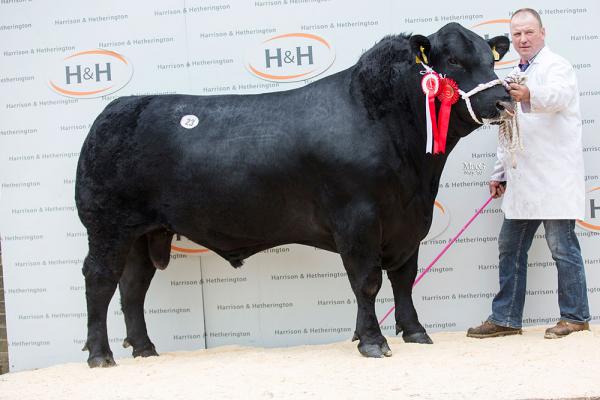 Commenting on his champion, Mr Armour said: “This bull had great power, presence and scope and walked well on the move.” Positive for calving ease, KP carries a terminal sire index of +41, a self replacing index of +52 and an eye muscle area of +6.1.

The second highest price of the day, selling for 7800gns was the reserve senior champion and first place winner of the second class, Carruthers Eric Thestar P569, from Waterbeck, Lockerbie-based Messrs Graham. This Rawburn Enigma G653 son is out of the Maplejacks Foggarty B022 daughter, Wall Erica Star F500, which was purchased at the Wall dispersal for 3800gns. Eric Thestar has already been shown and was reserve breed champion at Dumfries Show last year and sold to T Chalmers and Co, Canonbie, Dumfriesshire. 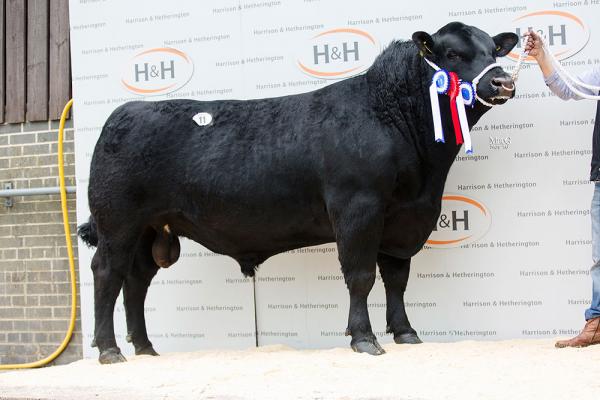 Alasdair Houston was back in the action again selling Gretnahouse Kind Lad P741, the pre-sale junior champion, for 7000gns. By the home bred Gretnahouse Blacksmith L500, he’s out of the Blelack Equity J127 daughter, Blelack Karama Lady L752 and carries a self replacing index of +63. Buyer here was A R Bell, Hawick, Roxburghshire. 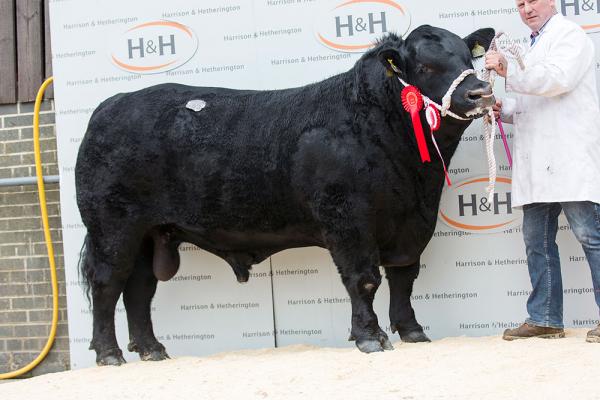 Also at 7000gns was Roscoe Elmundo P366 from Ross Farms. By Blelack Earthquake K384, this one is out of the Rawburn Transformer daughter, Belhaven Effervescence H073 and carries a self replacing index of +45. Buyer here was S H Spours and Sons, Belford, Northumberland. 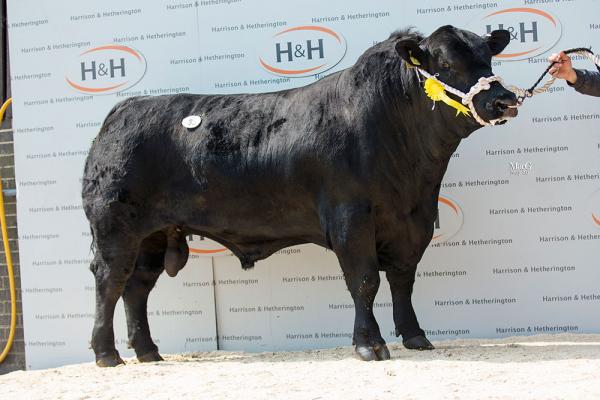 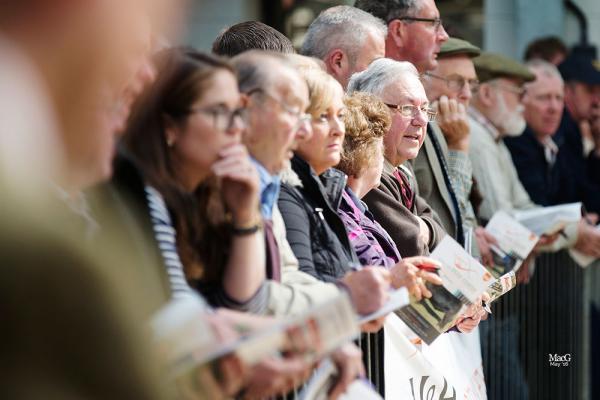 At 6700gns was David and Penny Evans, Nunthorpe, Middlesbrough, with their second placed Tree Bridge Plymouth P513. Home bred on both sides, this one is by Tree Bridge Pathfinder L336 and is out of Tree Bridge Polly Perkins J241, a Chapelton Dark Mahmoud E826 daughter. He was a regular show winner last year winning classes at the Junior Championships at the NEC, as well as both the Summer and Winter National Shows. This one sold to J L Gledson, Hexham. 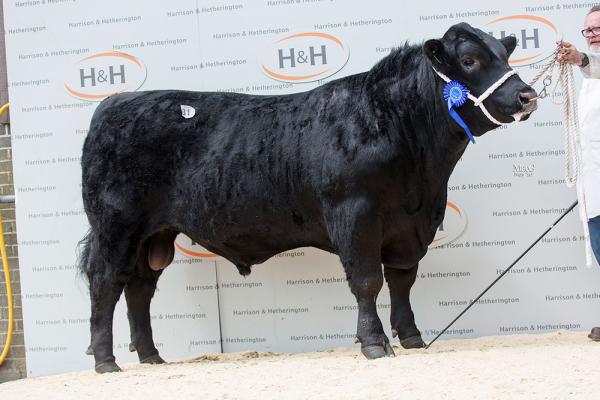 Meanwhile, two bulls sold for 6500gns, the first of which was the reserve senior champion, Oak Moor Black Edwin P250, from Gini Guttery, Haxby, York. This Duncanziemere Edwin J311 son is out of the Nightingale Ernie B133 daughter, Blelack Blackbird E235 and carries a self replacing index of +52. He found a new home with J and W Menzies, Thornhill, Dumfriesshire. 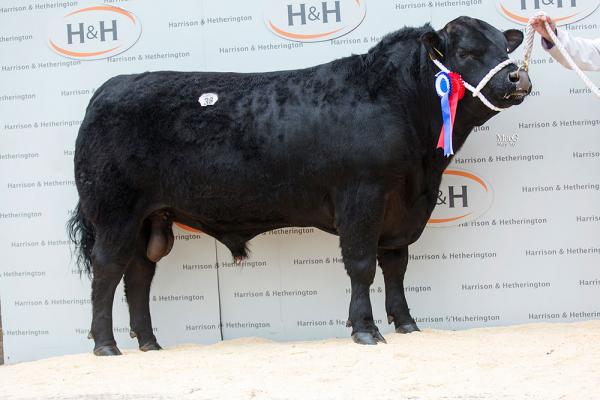 At that same money was the first place Elliot Roxburgh R070 from John Elliot, Roxburgh Mains, Kelso. This Netherallan Peter Pershore E052 son is out of the Vermilion Payweight J847 daughter Elliot Rosebud E020. He carries a self replacing index of +62 and a milk figure of +25 and sold to J S Fleming, Newton Stewart. 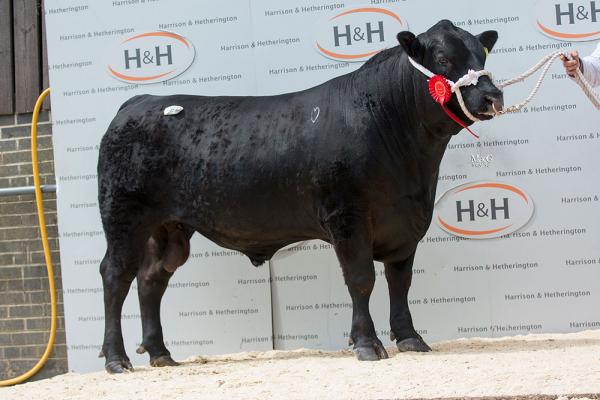 Then at 6200gns was Fell Lane Midnight Black P275 from Michael Lishman, Barrasford, Hexham. Again by Peter Pershore, this one is out of a home bred Auldhouseburn Karlos D218 daughter and sold carrying a self replacing index of +59. This one sold to L ells, Saline, Fife. 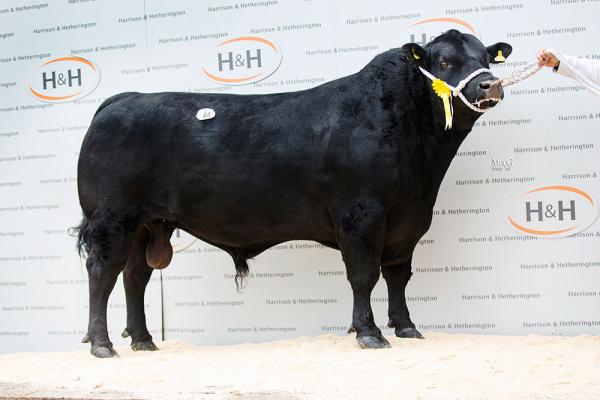 The best from the Earlston-based Gordon Brooke Estate was Linton Gilbertines Panzer R920, a first place Rawburn Black Hawk L261 son out of the Rawburn Lord Ross C216 daughter, Belhaven Pole Star H070. With a self replacing index of +53, he was knocked down for 5500gns to W and A M Aitken, West Linton, Peebleshire. 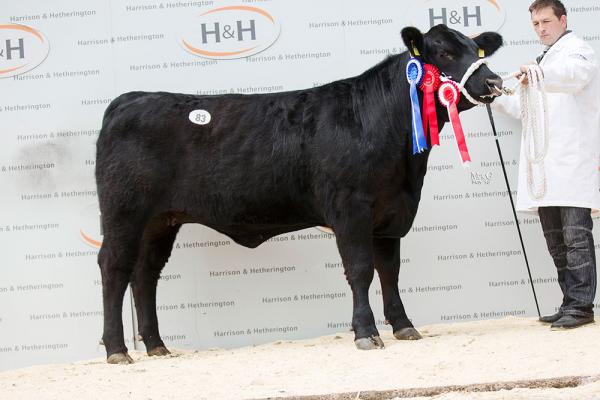 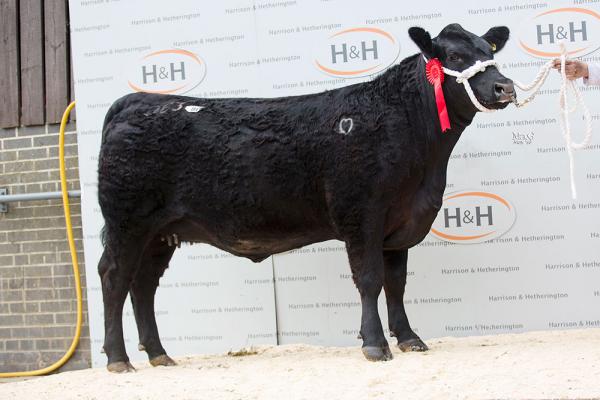 And joining her to Luton was her herd mate Rawburn Ebony P869, a March 2014-born Rawburn Dublin K218 daughter selling for 3500gns.

At 2500gns was the reserve female champion Tonley Kay Pride R209 from Neil Watter, Alford, Aberdeenshire. By Tonley Essien N955, this one is out of a Blelack Evor H929 daughter and was knocked down to Stewart Craft, Leslie, Fife.