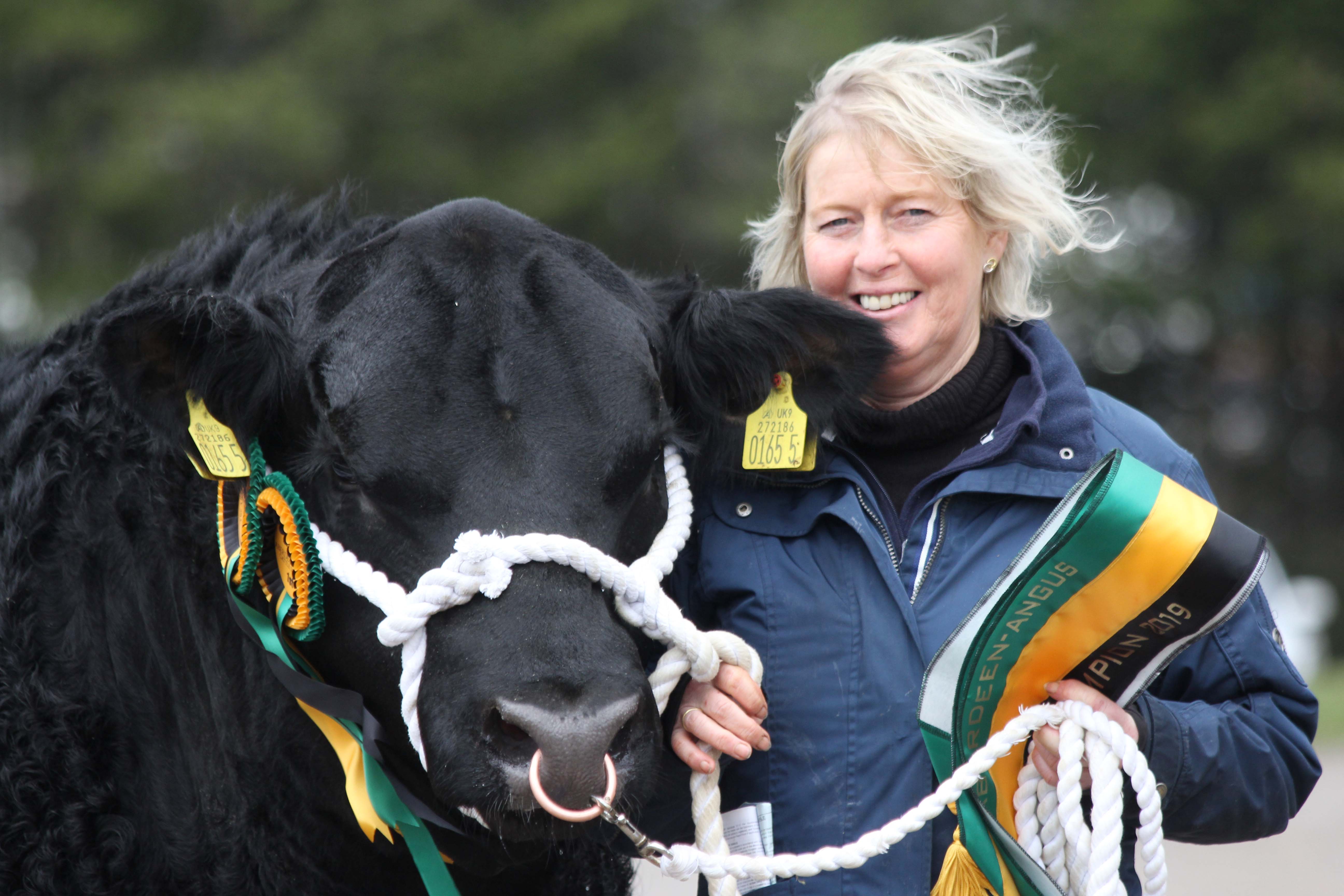 Prices reached a ceiling of 5100gns and following a 75% clearance auctioneer Trevor Wylie confirmed that 12 lots sold for a record average of £3167 per head.

Leading trade at the County Tyrone saleyard and setting a new herd record of 5100gns for County Down breeder Kenneth Bready, was the April 2013 born Kiltariff Dynamite N547. This third prize winner was sired by the Australian AI sire Ardrossan Admiral A2 and is out of the Nightingale Proud Jake G405 daughter Kiltariff Diva K293 – one of 11 cows in the Rathfriland-based herd.
This bull boasts exceptional Breedplan figures putting him in the top 1% for eye muscle area +7.8, top 5% for terminal sire index +46 and self replacing index +58, and top 10% for calving ease +2.7. Buyer was James Thompson from Culmore, County Londonderry. 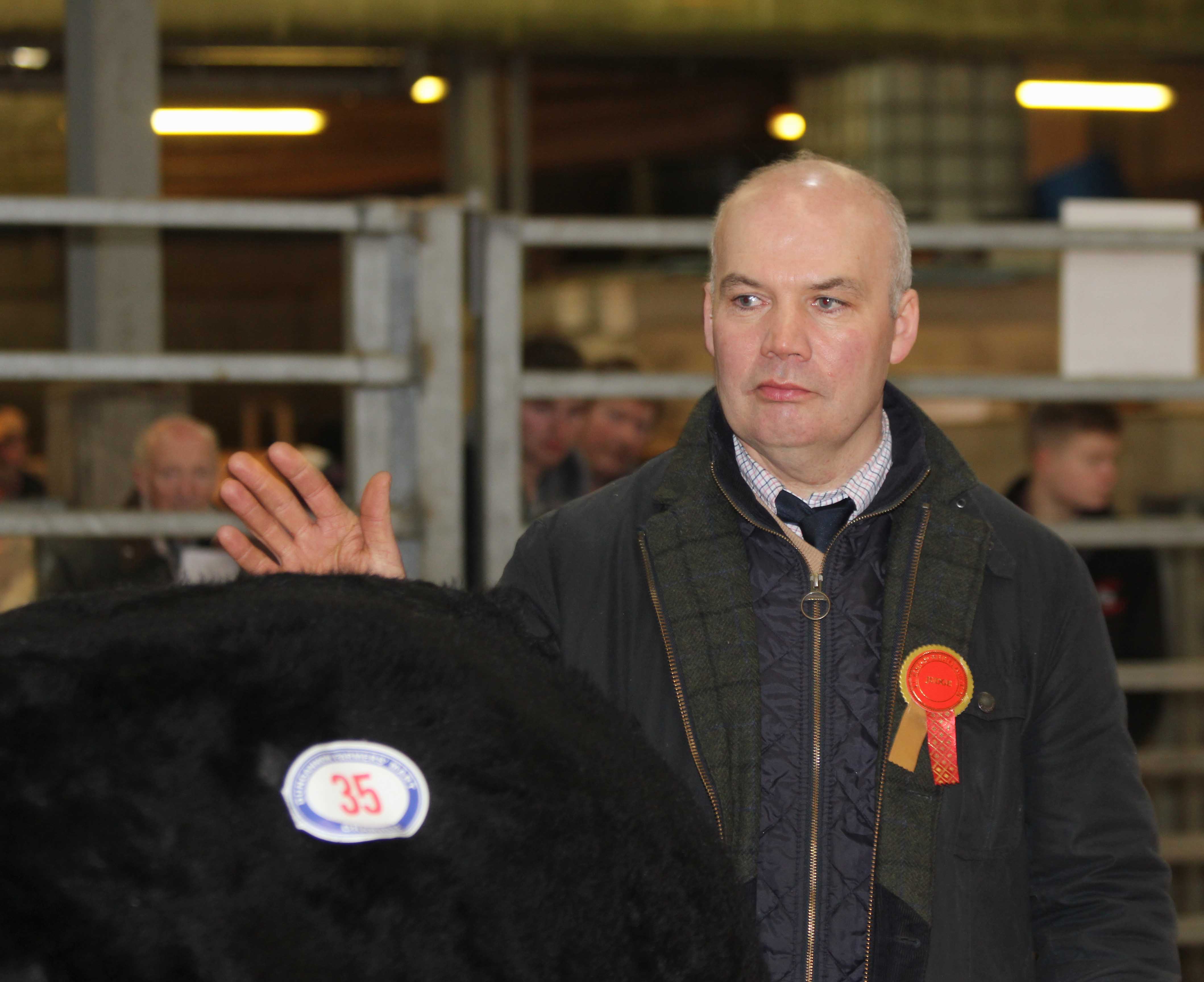 Second highest bid of the day 4800gns was paid to the Matchett family – Nigel, Gail, Sarah and Sam from Portadown, County Armagh, for the male champion Birches About Time N376. Born in July 2013 he is sired by the herd’s former stock bull Cloghogue Future and is out of the Netherton Krackerjack B164 daughter Lockerley Abbey F597. In the breed’s top 20% for calving ease at +1.5, he sold to Messrs Hatrick from Creggan Farm, Londonderry.

Judge James Porter who runs the noted 70-cow Old Glenort Herd based at Upper Ballinderry near Lisburn, County Antrim, described the champion as a tremendous bull with length, style and great breed character.

Two lots then came under the hammer at 3200gns each, the first being the May 2013-born Drummeer Persie N212 TSI+19 SRI+24 bred by Alan and Naomi Morrison, Maguiresbridge, County Fermanagh. Sired by Coneyisland Legend E112, he is out of the Nakkeg Nord 913 daughter Drummeer Pretty Polly H591. This second prize winner sold to David Johnston from Macosquin, Coleraine, County Londonderry.

Neville Forsythe and son Ivan, Moneymore, County Londonderry, realised 3200gns for the first prize winning Coltrim Edgar N791. Born in November 2013, he is by the herd’s former stock bull Curragh David J513 and is out of the Wedderlie Net Profit E916 daughter Coltrim Evana K516. This one is in the breed’s top 10% for terminal sire index +40 and self replacing index +49 and sold to William Henry from Garvagh, County Londonderry.

Next best at 3000gns was the second placed Lana Lord Halle N664 consigned by Alan and Lana Cheney who run 30 pedigree cows at Trillick, County Tyrone. Sired by stock bull Blackhaugh Easy Papa G728, he is out of a home-bred Ankonian Elixir 100 daughter. This July 2013 born bull is in the breed’s top 5% for daughter calving ease +3.7 and was secured by Alan McCay, Strabane, County Tyrone.

The reserve champion was brought out by Alwyn and Carol Armour and sons, Dromara, County Down. The April 2013-born Woodvale Potential N607 is by the home-bred Woodvale Trademark L257, and is out of Woodvale Polly Pride K095 – one of 10 cows in the herd. In the breed’s top 5% for terminal sire index +41, self replacing index +54 and milk +17, he has an eye muscle area of +4.6 in the top 15%. Buyer at 2,500gns was Plunkett McElduff from Castlecaulfield, County Tyrone. 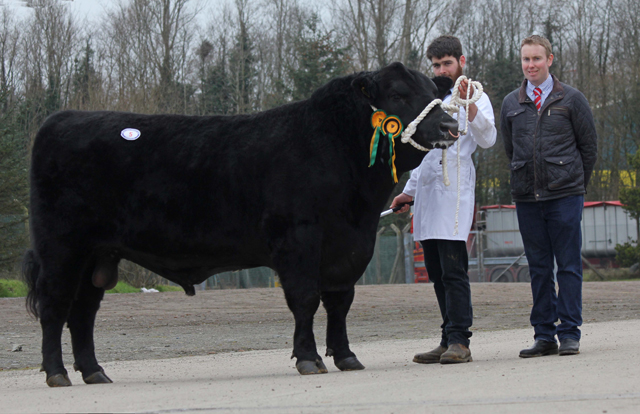 Jack Smyth from Newtownstewart, County Tyrone, secured the female championship with the May 2013-born Bessiebell Erica N431. Sired by Blackhaugh Time F610, she is out of an Old Glenort Lamont daughter carrying the Cleenish prefix. Buyer at 1700gns was Alan Rea from Ballynahinch, County Tyrone. 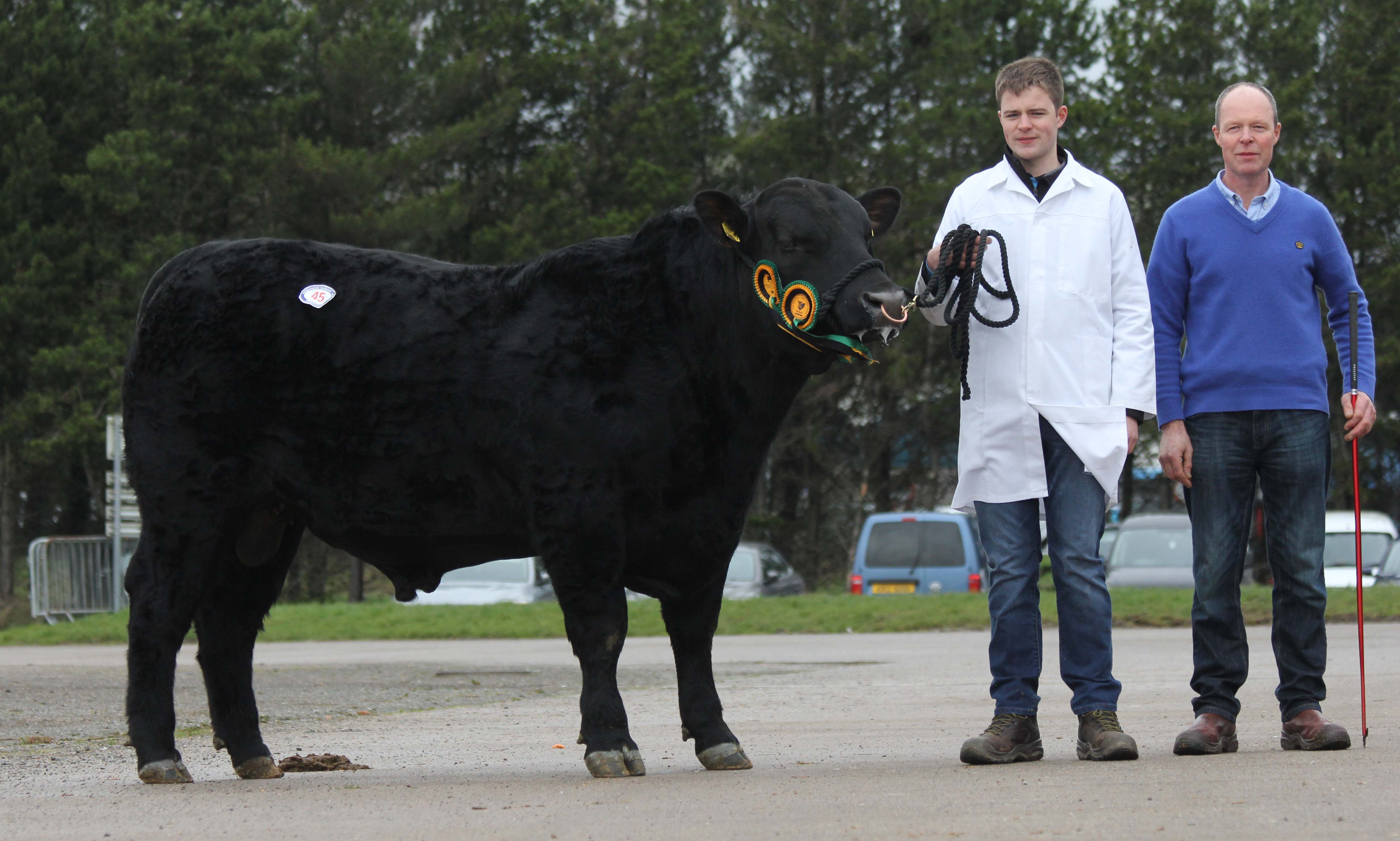 A draft entry of females from Neville and Ivan Forsythe’s Coltrim herd peaked at 1500gns for a four-year-old cow with bull calf at foot.