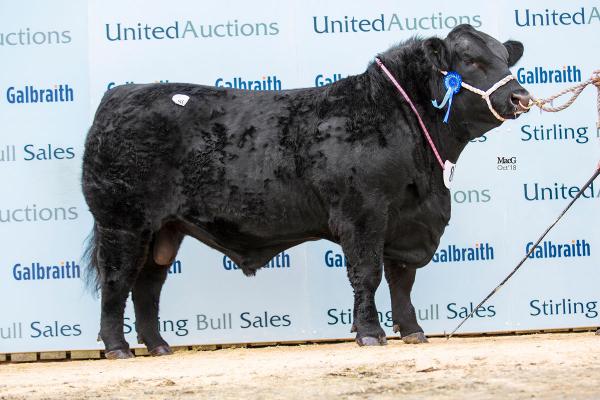 The autumn event at United Auctions in Stirling was a great one for the Aberdeen-Angus breed, with the Sunday’s judging highlighting a great standard across the board prior to an excellent sale in the ring on the Monday. Overseeing the judging on this occasion was Noel Hooke who commented;

”I thought the standard was very high. I was looking for long animals with great depth and locomotion and tried to stick to a certain type that was well-suited to both the commercial and pedigree markets. The standard was very good for an October event, with plenty of good, square bodied bulls. The champion itself was a lovely moving bull with lots of style and breed character.”

The sale which took place the day after the judging saw Aberdeen-Angus sell to a top price of 22,000gns, stealing the show this autumn at Stirling Agricultural Centre. The main Aberdeen-Angus sale saw an 80% clearance rate reached with 47 bulls selling to an average of £5,737, an increase of £674 on last year, making it a great day for the breed.

Selling for the top price of 22,000gns on Monday 22nd October’s sale was the second prize bull from the Gordon Brooke Estate, April 2017 born Linton Gilbertines Powerhouse by Rawburn Dublin and out of Belhaven Poke star. This one was the reserve male champion in the summer’s Great Yorkshire Show and went to Chris and Janet Watmore of the Holystone Estate in Northumberland.

The five-figure prices kept appearing around the ring at the sale, with no less than 6 lots selling for 10,000gns or above. Included was Donald Rankin’s January 2017-born Kilmaluag Eriskay by Retties JFK out of Mosston Muir Etta who sold for 14,000gns to the Massie family’s Aboyne-based Blelack herd. Eriskay had a successful show season, including reserve junior male champion at the 2018 Royal Highland Show and male champion at the 2018 Granton Show. 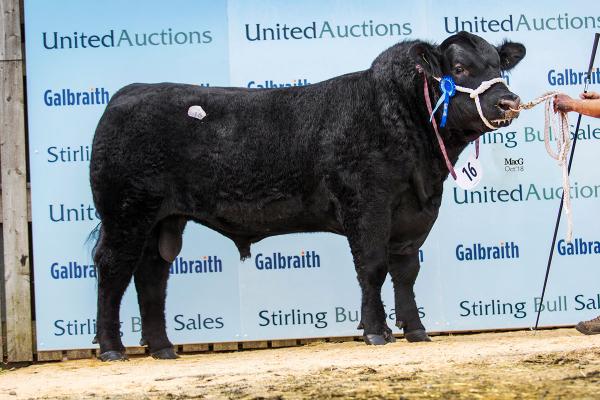 The reserve overall champion from Sunday’s judging, Tynet Pegasus, sold for 13,000gns to Marion Tilson’s Wedderlie herd based in the Borders. Pegasus is an AI son of Warrenho Dalmigavie out of Fearn Abbey Poppy and came from first-time exhibitors at the event, Hugh, Cara and Lorna Thomson of the Tynet Farm near Buckie, having only established their herd as recently as 2014. 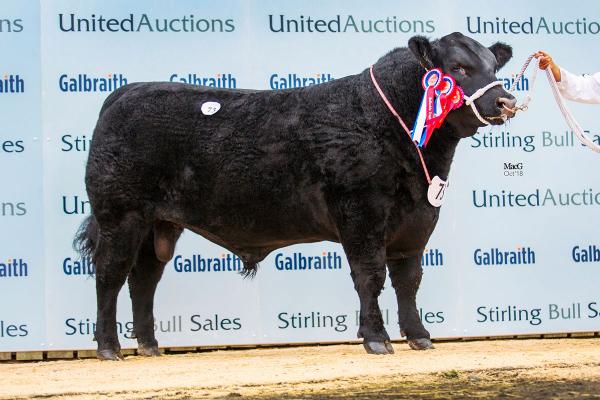 The reserve junior champion was next best selling for 12,500gns to David Lindsay of Baldovie Farm in Kirriemuir. This one was Cairnton Blackbeard by Haymount Walarlo out of Cairnton Blackbird of the Howie family in Banchory. The April-born bull was overall champion at Banchory Show in the summer and is described by those at Cairnton as their best bull ever. 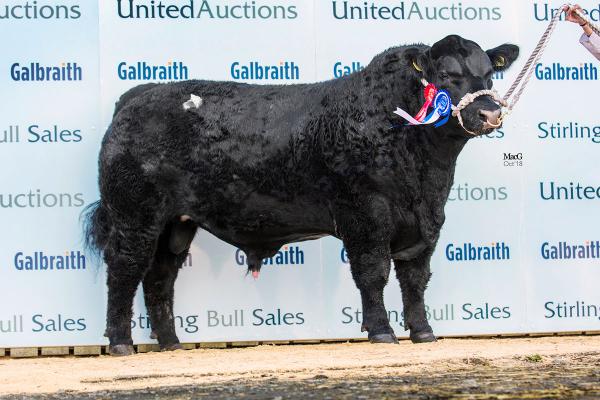 The May 2017-born bull McCornick Evening Express from Martin McCornick sold for 11,000gns to Andrew Elliot Blackhaugh, Cloverfords, Galashiels. This one is out of McCornick Evening Star and by Halbeath Pentagon who also sired McCornick Destroyer, junior overall champion at the October 2017 Stirling Bull Sales. 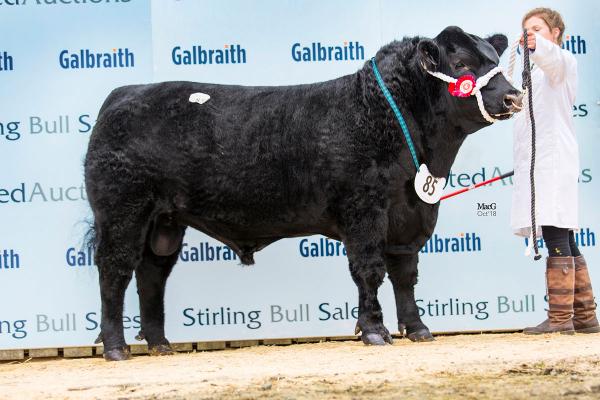 Having taken the breed overall championship on the Sunday’s show, January 2017-born Rulesmains Egbert from Andrew Hodge sold for 10,000gns. This one was sold to breeders from the north of Scotland, for Hamish Sclater’s Turriff-based Deveron herd and the Raddery herd of the MacGregors in Fortrose. Egbert is an AI son of the 17,000gns Hallington Edition, and was the junior male champion at the 2018 Royal Highland Show in June. 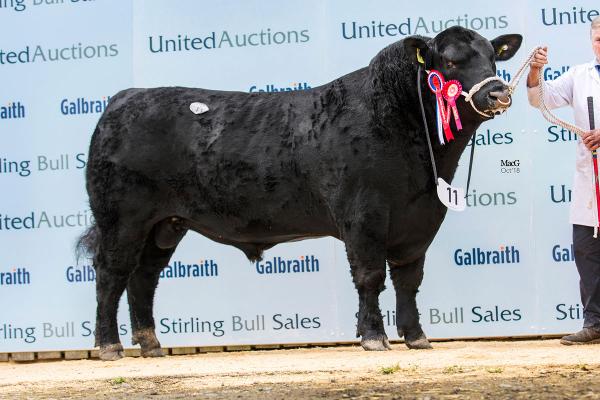 The MacGregors managed to recoup some of what they’d spent when they sold the March 2017-born Raddery Esprit, by Deveron Master Banbury out of Deveron Elize, for 7,500gn to J McCorkindale & Son of Macharioch in Southend. Another one at 7,500gns was the April 2017-born Eilean Extra by Rawbur Enigmatic out of Eilean Emma from MAG McSporran, Eilean Farm, Innerleithen. This one went to R and J Johnston of Orkney. 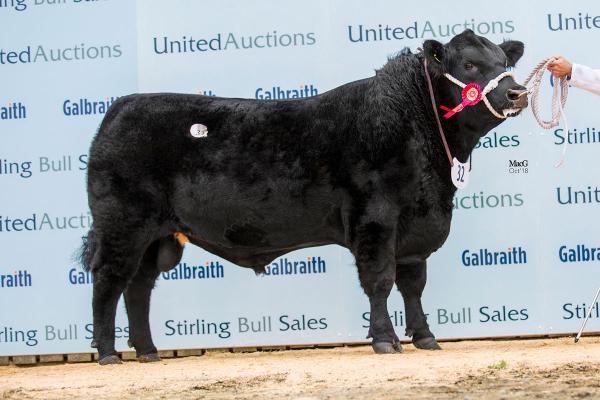 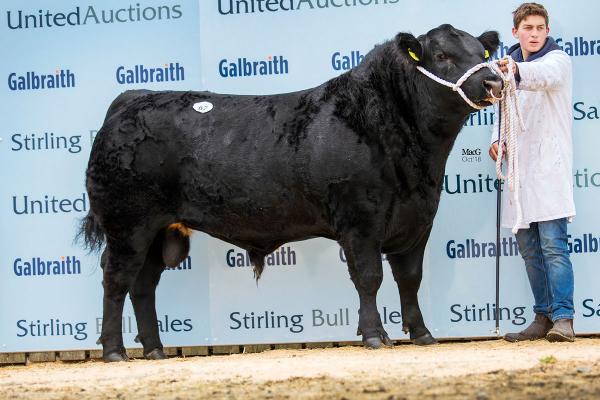 Some other key prices from the ring include:

From the females, some of the key prices from the sale were:

The key highlights from the judging at Stirling in October were as follows: 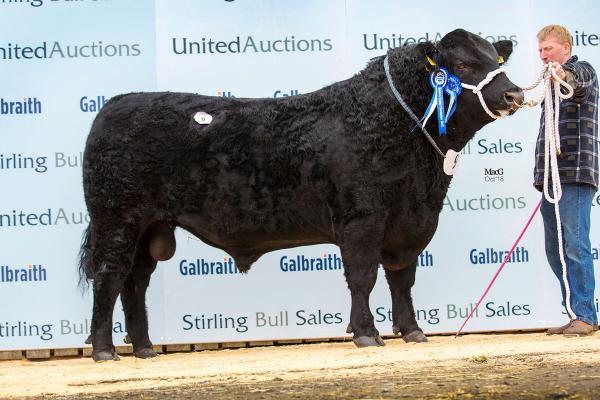 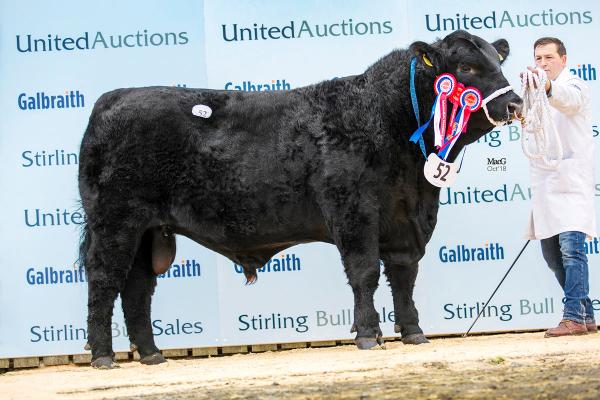 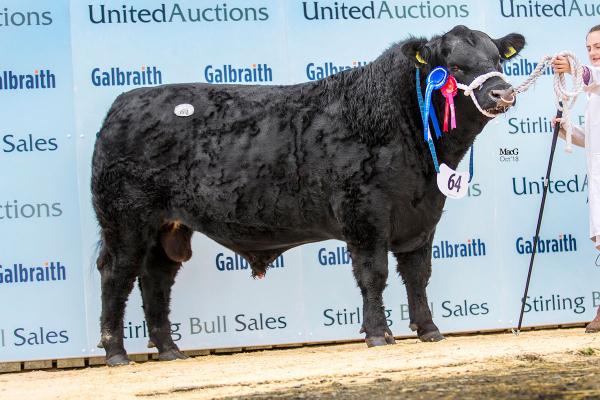 Some general photography from the event: 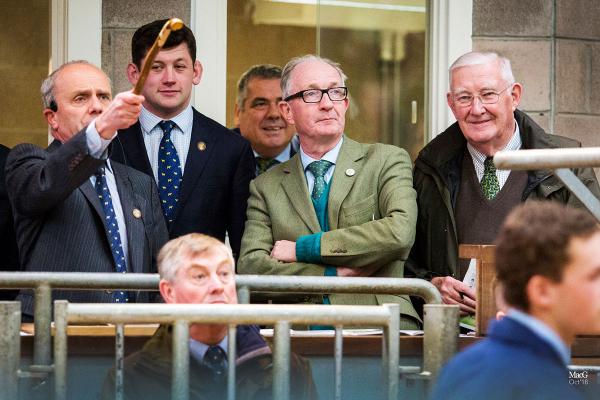 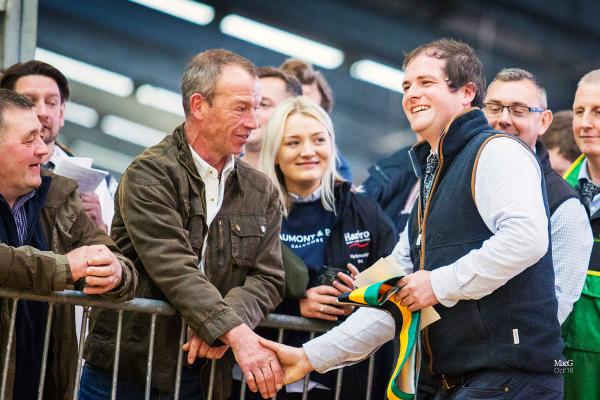 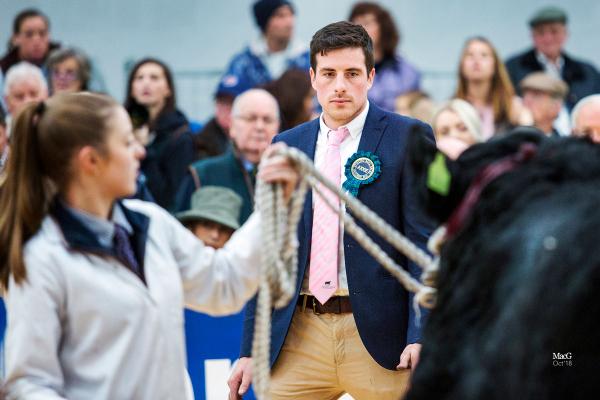 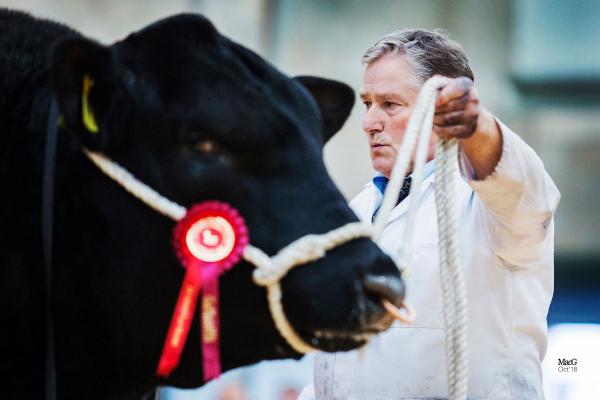 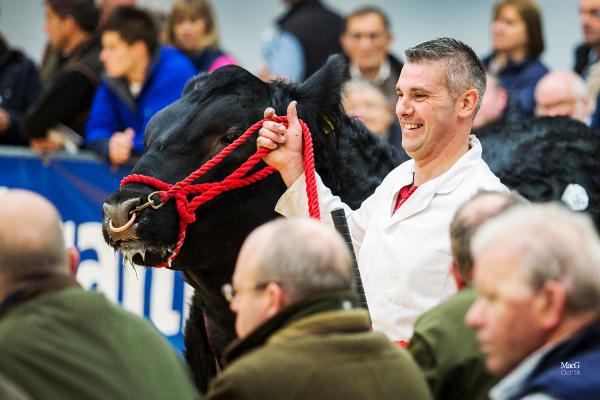 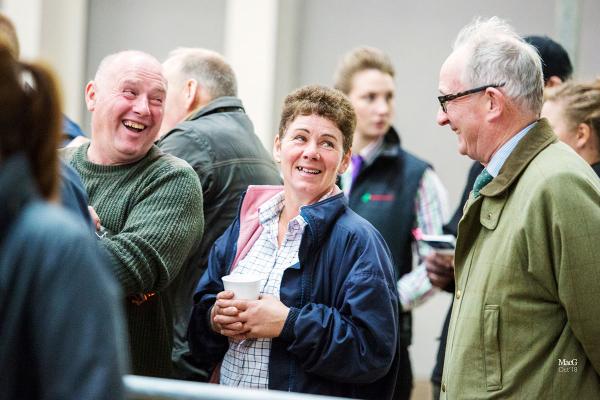 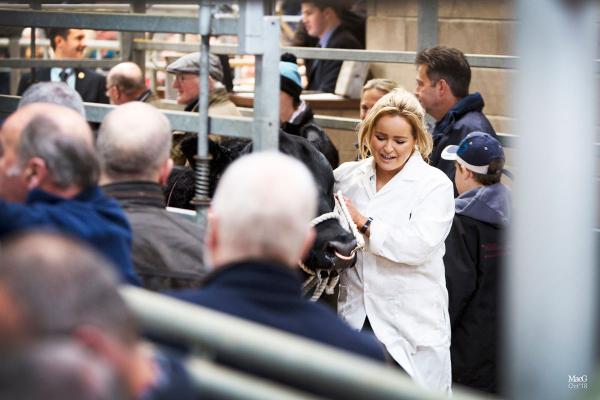 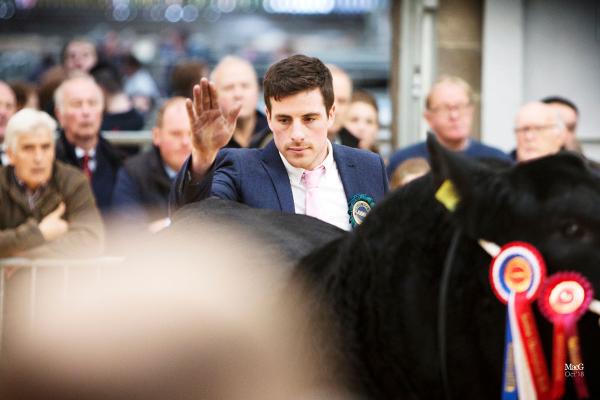 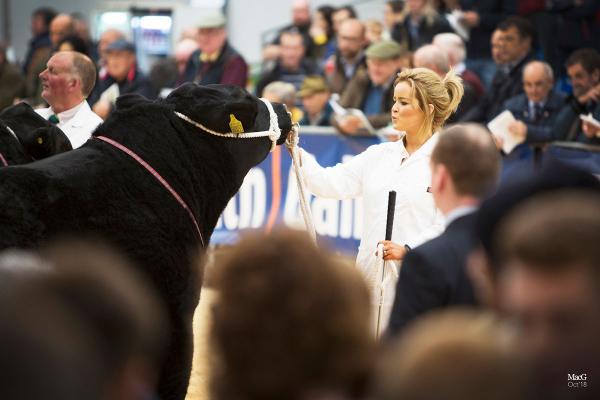 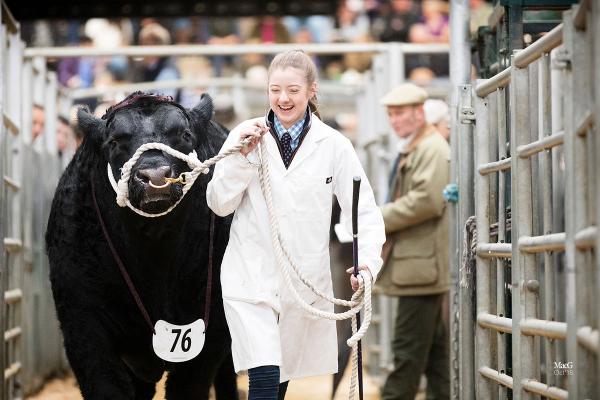