Prior to using Aberdeen-Angus genetics, calves were too heavy resulting in difficult calvings, explains John, who farms at Silloth, just outside of Wigton, Cumbria, under the trading name of A and A E Harrison. “The Aberdeen-Angus, however, produces lighter calves with fantastic calf vigour, they’re desperate to get up and going. The improved calving is also helping to tighten up the calving pattern.”

John has experimented with Aberdeen-Angus artificial insemination through Genus, but purchased his first bull from the Rosslayne herd in 2012 and has since returned for a second. “I don’t run a bull with the cows, preferring to bring bulling cows to the bull to avoid the hassle of the bull going through the milking parlour. The docility of Aberdeen-Angus bulls is a real bonus as far as this is concerned,” he adds.

Selling stores at about 18 months old with little concentrate fed means John looks for an easy fleshing, medium sized bull with ease of calving a priority to ensure cows return to service in good time.

Both cows and heifers calve at the same time in the spring with the calves moving to once a day feeding on powdered milk after being stomach tubed colostrum, before going out to grass as young at one month old. The hardiness and strength of the Aberdeen-Angus mixed with the New Zealand Friesian genetics means these young cattle thrive at grass, explains John.

Once on grass, concentrate – a barley and soya mix – is introduced at six months of age at just 1kg a day. “These calves are then outwintered on kale and round bale straw.” Although John admits he hasn’t done the costs for the outwintering period, there’s no doubting the fact this is a cheap and incredibly cost effective method for rearing store cattle. “Granted, the land is free draining soil and other than a period of eye infections within the last batch, the stores handled the last wet winter well and health issues remain at a minimum. 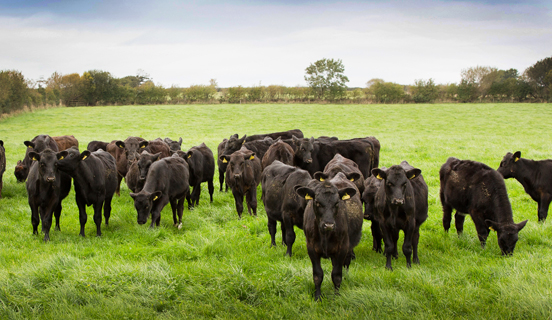 It’s this outwintering period that John believes is the key to them summering so well before selling. “The hardy nature of the easy fleshing stores, combined with good grass quality means they perform well in their second summer.” All stores are sold through Wigton Market with steers hitting the £1100 mark and heifers around the £900 on the first batch sold this year. “Even without doing the sums, it’s a cost effective way of producing stores and is largely grass based with a bit of straw and barley early on.

“Costs are further reduced by using the muck from the cows and the housing period of the stores to maximise yields in the kale crop, adding fertility back in to the soil before it is reseeded back to grass.”

And although John is farming in a largely Continental area in terms of beef cattle, there is a ready demand in the store ring for Aberdeen-Angus sired cattle. “The premium is certainly there which helps long-term down the chain and although store buyers take both steers and heifers to finish, I often feel the heifers are too good to kill and would make fantastic suckler replacements.”

With a lot of off-lying ground and a plan to expand the dairy herd to 300 cows in the spring next year, John is increasing his use of the Aberdeen-Angus bulls, with this allied to AI and one Continental bull used on the older cows. “It is likely we’ll be increasing store cattle numbers as a result, with premium earning Aberdeen-Angus cattle making up the bulk of these.

“I prefer not to run a bull with the cows so we bring the cows to him and conception rates have improved to 50% and are still increasing.”