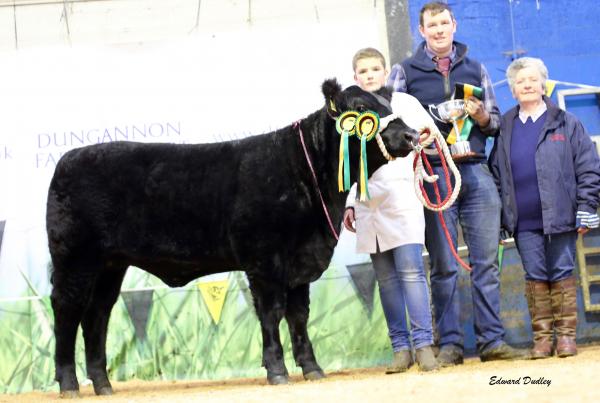 Mr Bishop who runs the 45-cow Warrenho Herd in Berkshire said: ”This is my first time judging in Northern Ireland, and I’d like to thank the club for his invitation and hospitality. The standard was high in all classes, but I am particularly impressed by the femininity of the females, and the number of bull calves showing great potential.”

After a three-hour judging stint Rob Bishop tapped out Crew Destiny U601 ET as the winner of the coveted JB Lamb Memorial Cup for the supreme overall champion. This seven-month-old heifer was bred by Samantha Allen and Allen Shortt, from Strabane, and also won the heifer calf championship. Sired by Hallington Evo L333, she is bred from the 2012 All-Ireland senior heifer winner Crew Dakota L101 – one of seven cows in the herd.

“The overall winner oozes ring presence and is picture perfect,” said the judge. “She led an 8-strong class, and is full of breed character, well fleshed for her age, and has good locomotion.”

Claiming the reserve overall championship was the bull calf champion Richhill Major U002 bred by Robin Lamb, Richhill. This seven-month-old bull was sired by the 40-cow herd’s stock bull Weeton King Lear R452. His dam, Richhill Missie N322 goes back to the 30,000gns Netherton Missie A114.

“This is another great calf with a lot of potential. He is long and clean, has a good second thigh, and walks well.” 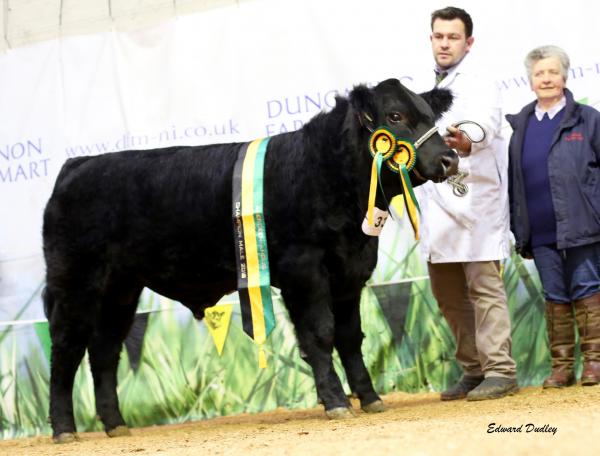 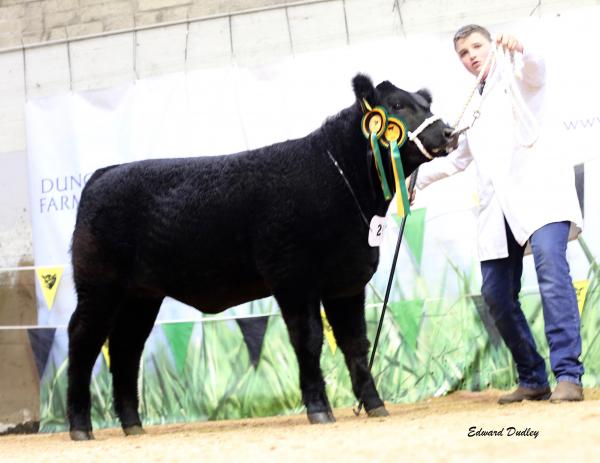 The reserve male calf championship went to the January 2018 born Cloghoghill Eric U546. Bred by Robert and Joyce Smyth, he was bought privately by Adrian and Graeme Parke, Strabane. This one was sired by Cloghogmill Prince Pete R255, and is out of Cloghogmill Emma R244. 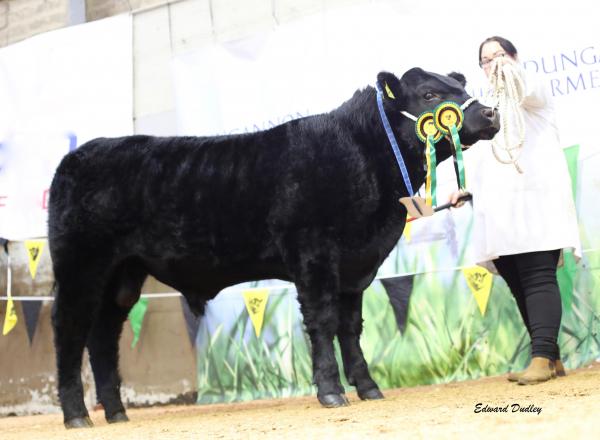 Securing the yearling championship ribbons was the January 2017 in-calf heifer Dartrey Exquisite T585 exhibited by Hylda Mills and Brian Johnston, who run a herd of 27 breeding females at Scarva. She is a daughter of Dartrey Duleo R241, and is bred from Dartrey Exceed R237. This one was best of opposite sex to the breed champion at Castlewellan Show in July. 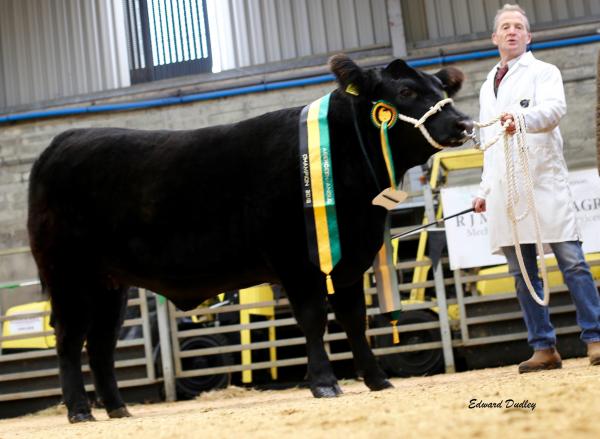 Rob Bishop added: “This is another flashy female. She has a great Angus head, good locomotion, and is well-fleshed.”

Standing reserve in the yearling championship line-up was the April 2017 bull Coolermoney Samson T725 from Adrian and Graeme Parke’s herd at Strabane. He was sired by Cloghogmill Eric R233, and is bred from The Moss Saville L073. This bull won numerous first prize rosettes on the show circuit, and was male champion at Balmoral, and supreme champion at Armagh.

“This is a super young bull with great conformation,” commented the judge. “He is long and deep, has a great second thigh and will grow into a good stock bull.” 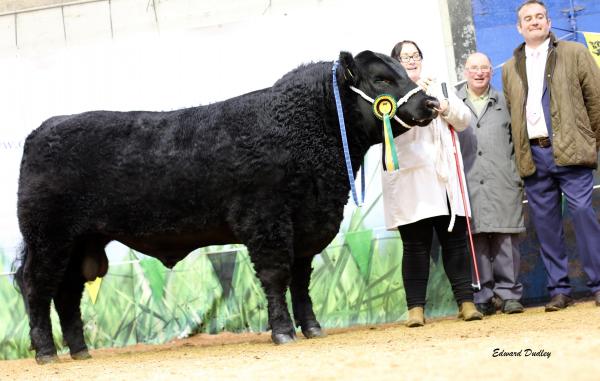 The Parke family also won the Mossbrook Perpetual Trophy for the best pair of calves. The winning duo were the January 2018 heifer Coolermoney Rose U773, and Cloghogmill Eric U546. Both secured first prizes in their respective classes, and were well matched for size and conformation. 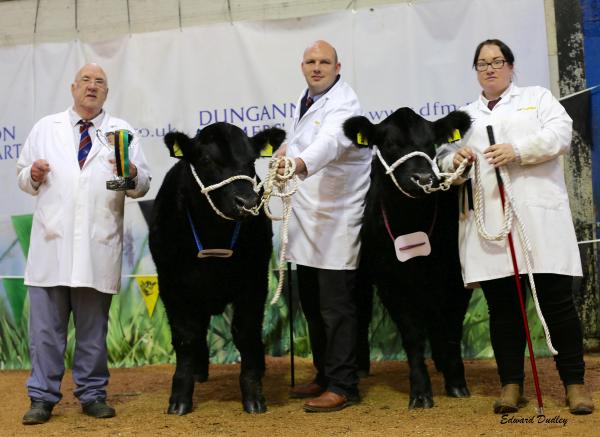 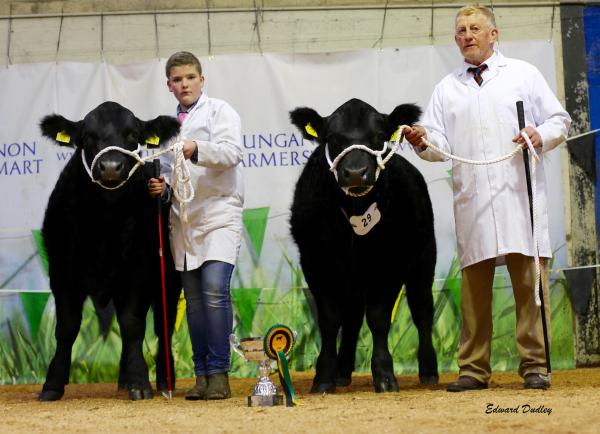 NI Aberdeen-Angus club chairman Alan Morrison thanked everyone who contributed to the success of the event. “Thanks to Rob Bishop for judging our 14th annual calf show. We are also indebted to the Wylie family for the use of the excellent facilities at Dungannon Farmers’ Mart. Thanks also to our sponsors for their generous financial support.”  Sponsors include: Irish Aberdeen-Angus Association, ABP Newry, John McElderry Ltd, Dovea Geneticsw, Fane Valley, RJ Mulligan Agri, Irwins Feed and FS Heron.