Aberdeen-Angus bulls to 4,600gns at Dungannon 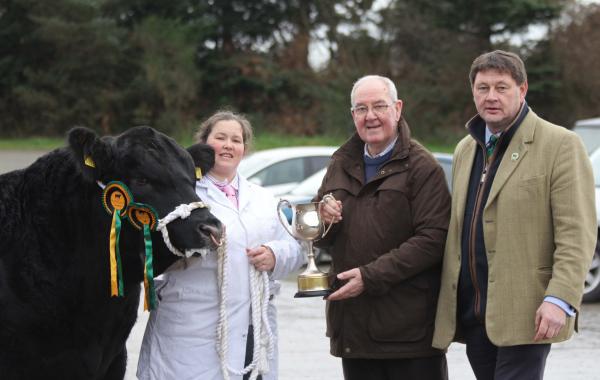 There was a steady demand for Aberdeen-Angus bulls at the society’s December show and sale, hosted by Dungannon Farmers’ Mart. Here is a full report, followed by photography from the event.

Prices peaked at 4,600gns, with auctioneer Trevor Wylie confirming that 18 bulls were traded in an 82% clearance to average £2,841 per head – an increase of £450 on this time last year.

Sale leader was the fourth placed Richhill Romeo S427 TSI+24 and SRI+32 brought out by Robin Lamb and sons from Richhill. Born in April 2016 he is by the herd’s stock bull Friarstown Prairie Chief M228, and out of Richhill Rosanna M075 – one of 40 cows in the herd, and a daughter of the 2009 Balmoral junior champion Richhill Rosanna G067.

Romeo is in the breed’s top 25% for calving ease +1.1, and sold to Kenneth Stewart from Larne who runs a herd of 140 dairy cows and 40 suckler cows. ”This is an upstanding bull with good legs and feet and great conformation,” said Mr Stewart who finishes his calves through the Aberdeen Angus producer scheme operated by Linden Foods.

Second highest bid of the day 4,000gns, was paid to Nigel, Gail, Sarah and Sam Matchett, Portadown, for the May 2016 Birches Alan S135 TSI+38 SRI+55. This third prize winner was sired by stock bull Carrigroe Fred, and is out of the TC Grid Topper 355 daughter Netherton Annie H474 – one of 18 cows in the herd. He is in the top 10% for calving ease +3.2, and sold to a suckler herd owner from Downpatrick.

Moses Irwin from Fintona realised 3,200gns for the reserve male champion Denamona Petershore S833. Sired by the Ankonian Elixir 100 son Netherallan Peter Pershore E052, he is the first bull bred from Denamona Penny G876 – one of 60 cows in the herd. This May 2016 entry caught the eye of Thomas Purdy from Annalong.

Judge Desmond Mackey from the 40-cow Moneybroom Herd in Lisburn described the reserve champion as a well-grown bull. “He is eye catching, very correct, and a great example of the Aberdeen Angus breed.”

First to go was the May 2016 Drumcorn Lord Irving S271 bred by husband and wife team John and Ann Henning, Moira. Sired by Te Mania Emperor E343, his dam is the Blelack Prince J165 daughter Drumcorn Lady Ida M895. This bull boasts Breedplan figures of TSI+45 and SRI+57 in the top 5%, and is in the breed’s top 10% for eye muscle area +6.1. Buyer was K Gawn from Kells, Ballymena.

The second placed Coltrim Elton S583 TSI+36 SRI+53 sold at 2,900gns for Neville and Ivan Forsythe from Moneymore. Born in June 2016 he is by Oakchurch Duster M109, and is out of the Wedderlie Ergo M574 daughter Coltrim Evana P067. This one is in the breed’s top 5% for calving ease +4.7 and eye muscle area +6.9. Highest bidder was TJH Truesdale from Ballyward.

Scooping her first-ever championship sash was Fiona Troughton from Ballygawley who brought out the male champion Tullybryan Black Brexit S906. This June 2016 Bunlahy John G son is out of the 6-cow herd’s foundation female Corriewood Black Belle L144 – female champion at Dungannon in February 2013. He sold to G Vance from Lifford, Co Donegal, for 2,000gns.

Desmond Mackey added: “The male champion oozes breed character, and has great conformation and a nice head. He is very correct on his legs and feet. “

The second placed Ashvale Blackbelle S972 bred by Richard and Fiona McKeown, Templepatrick, sold at 3,000gns to Alwyn and Carol Armour’s Woodvale Herd in Dromara. This May 2016 in-calf heifer is a daughter of Woodvale Kool Jaguar P633, and is out of Ashvale Blackbelle K364 – one of 25 cows in the herd.

The female champion Ember Princess Lil S144 sold at 2,700gns for Freddie Davidson from Banbridge.  Born in March 2016, she is by former herd sire Birches Lord John M052, and is out of Drumcrow Princess Lil K436. This heifer was junior champion and reserve female champion at Balmoral Show, and is scanned in-calf to Cheeklaw Edgar R515. Buyer was Robert Anderson from Richhill.

Cathal McGinty from Keady paid out 2,200gns to secure the reserve female champion Ashvale Victoria S961 bred by Richard and Fiona McKeown. Born in April 2016 this in-calf heifer is by Cardona Jewel Eric M826, and out of Old Glenort Victoria G221.

Results from the showring: 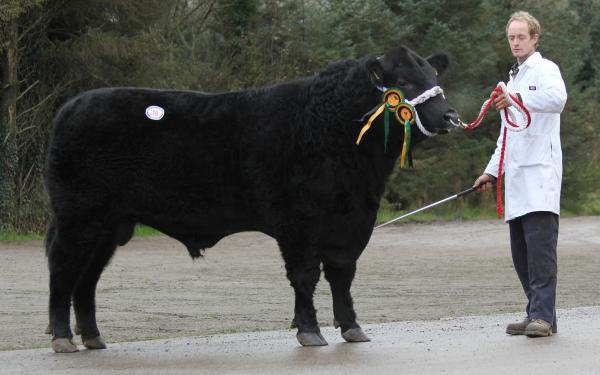 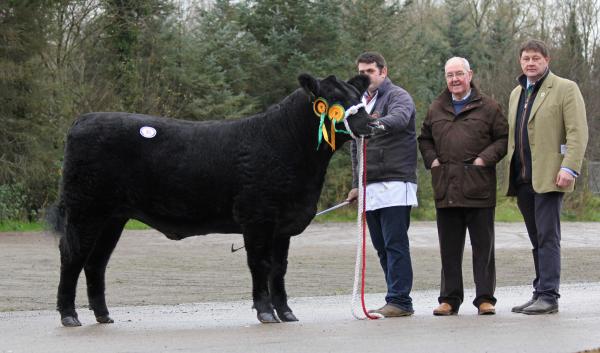 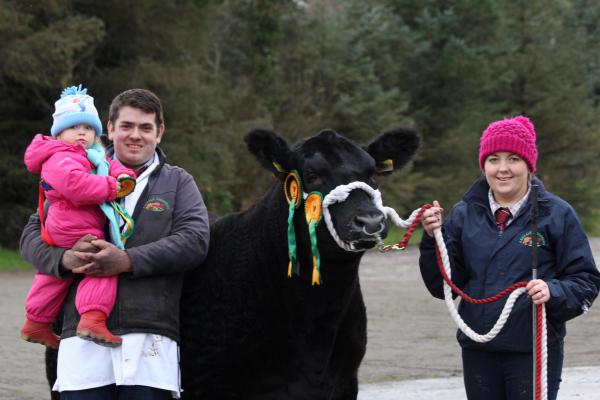 The McKeown family from Templepatrick, Richard, Fiona and two-year-old Caroline, with their reserve female champion Blackbelle S972 at the Aberdeen Angus Society’s December show and sale in Dungannon. 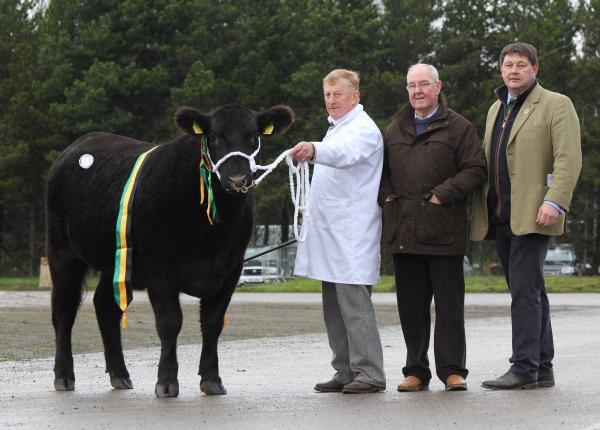 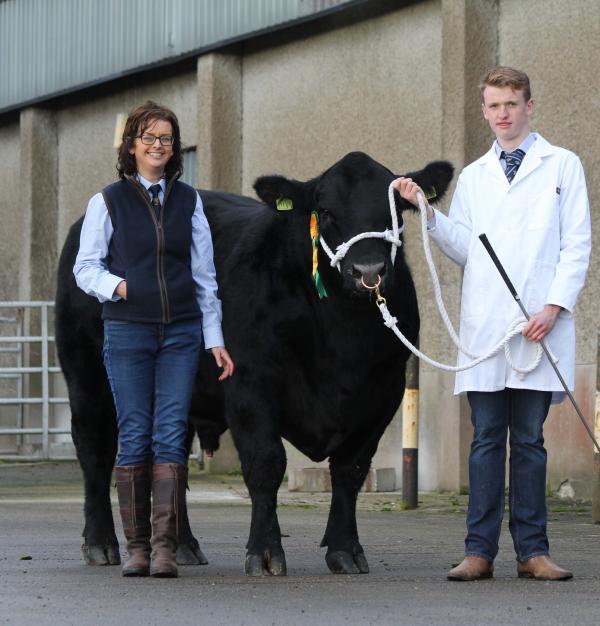 Gail Matchett, and son Sam, Portadown, with the third prize winning Birches Alan S135 sold for 4,000gns at the Aberdeen Angus show and sale in Dungannon. 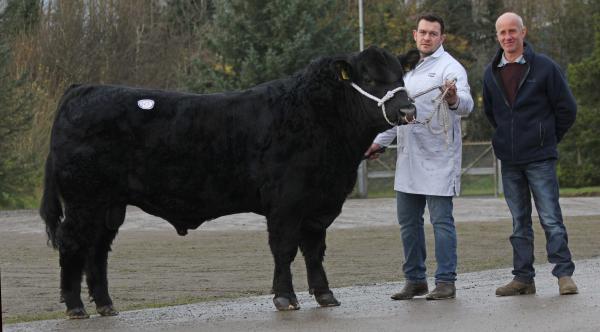 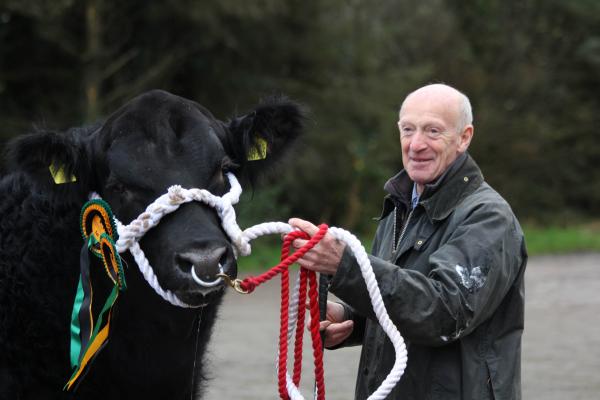