For more than 17 years, Aberdeen-Angus cattle have been the beef breed of choice for County Tyrone dairy farmer Alan Liggett.

Mr Liggett runs a herd of 160 commercial Holstein cows on 250 acres at Corbo Farm, on the outskirts of Clogher. “Aberdeen-Angus bulls have been used at Corbo since I started dairy farming in 1997,” explains Alan, who established the farm business when he left school.

Holstein AI sires are used across the herd from December to May and an Aberdeen-Angus bull is used on heifers and as a sweeper. “We fine the Angus bulls to be docile, very fertile and more importantly, the breed is renowned for shorter gestation period and calving ease.”

Alan adds: ”Aberdeen-Angus is the ideal choice for using on dairy heifers and cows. Less stress on the cows at calving means that they reach peak milk production quickly and more efficiently. They also cycle naturally and are easier to get back in-calf.” He is a member of the producer scheme operated by Aberdeen-Angus Quality Beef Ltd. Over the years he has been finishing heifers and reaping the benefits of a bonus worth £60 to £100 per head, depending on carcase weight and grade.

Heifers left the farm at two-years-old, achieving deadweights of 300-350kg. “These heifers were grazed naturally and the majority of them killed out at R grades.” 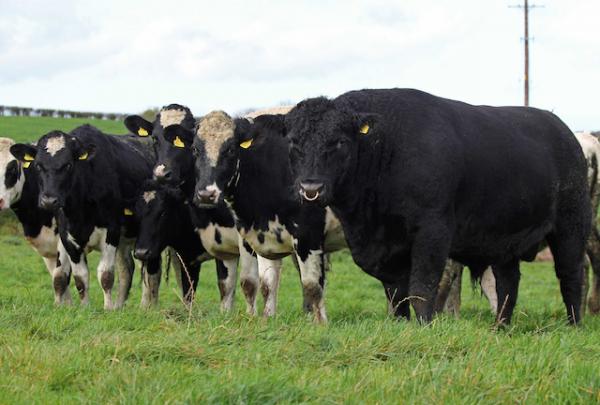 Male calves were kept entire and finished alongside their Holstein counterparts. “Compared to the Holsteins, the Aberdeen-Angus bulls virtually thrived on fresh air. They were fattened in the house and slaughtered at between 14 and 16 months-of-age, resulting in carcass weights ranging from 350-400kg.

“I prefer to produce bull beef as it means I get the animals away at an earlier age.” However, this last batch of beef cattle were sold as stores at Dungannon in April, where a 490kg bullocks changed hands for £900.

Recently Alan has adopted a change in farming policy and is concentrating on increasing dairy cow numbers. “With labour restrictions and nitrates issues, I’ve decided to sell the Aberdeen-Angus progeny as dropped calves. They leave the farm at between two and three weeks of age.” During the spring the calves sold from £180 to £240 per head at Clogher and Dungannon Marts. “In the current climate, trade is back with the calves worth between £180 and £200 each,” explains Alan.

“There is a strong demand for Aberdeen-Angus bred progeny, as the various schemes offer financial incentives for bullocks and heifers bred from a pedigree registered Aberdeen-Angus bull. I have a number of customers who are keen to acquire Aberdeen Angus-bred calves direct from my dairy herd.”

Alan is full of praise for the Aberdeen Angus breed. “The calves are lively and thrive from day one. Aberdeen-Angus progeny are efficient feed converters and they are versatile in a range of management systems.”

Aberdeen-Angus stock bulls are purchased from the Society’s official sales in Dungannon Farmers’ Mart. When selecting a new herd sire Alan admits that he is keen to secure a bull with good conformation, breed character, sound feet and legs and a nice temperament.

The herd’s current stock bull, Railview Phantom, was purchased in February. Born in May 2011, he was bred by brothers Marcus and Norman Rutledge from Omagh and is by the Moss Mr Eshton son, Luddenmore Fionn and is out of the home-bred DMM Distinction daughter Railview Polly Anne C543.