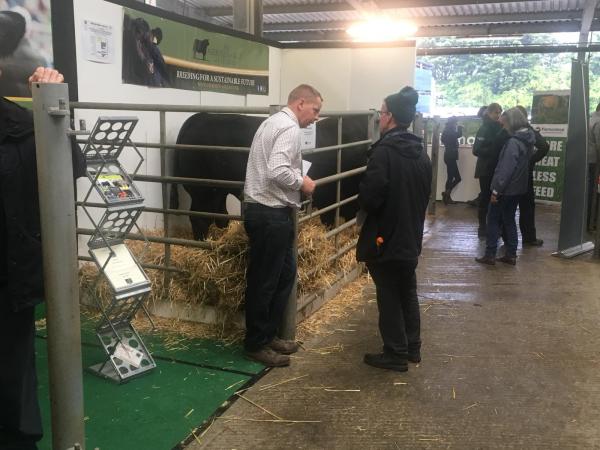 The Society again had a stand at The National Beef Association Beef Expo 2018 this year held in Shrewsbury on the 25th of May 2018, at the halls at the Livestock Auction Centre.  President, Angela McGregor along with Andrew Shufflebotham, Gayle Bersey and John James were all present and full of enthusiasm on what was a really busy and positive day.  They were also lucky enough to be joined by Hannah Baldwin who has been a great ambassador for our Youth Development Programme and new recruit Jasmine James to help answer questions and hand out the delicious pies and sausage rolls supplied by Andrew’s Cheerbrook Shop. We most definitely had the best-catered stand!

Andrew provided stock bull Penguin Henry M503 for the stand.  He attracted many positive comments and admirers. There was a huge amount of interest surrounding the breed from all sectors; dairy, beef and also pedigree breeders who came over for a chat, some regulars as well as some new visitors from England, Wales and Ireland.  It’s always satisfying to see such a range of visitors coming to the stand and the diverse reach Aberdeen Angus has.

Those attending the show were commenting on how they were already using Aberdeen Angus bulls and seeing the benefits, plus many looking for options for the future. There was a lot of interest in finding out about finishing Aberdeen-Angus cattle.  Two dairy cross steers from the Callwood Family, Lea Farm, Nantwich, which led to much interest and discussion over profitability of fattening Angus cross cattle. Facts and figures were provided which added real value and this created a great opportunity to speak in detail on rations, prices and grading. The premium displayed made spectators with other breeds stop, think and question where the Aberdeen-Angus market is at.

There was a serious demand for bulls locally, and the nearby club lists were handed out and/or editions of the latest Aberdeen-Angus Review, along with contact details of the club secretaries. There was also the bull buying guide on hand to dish out for potential new breeders, and we were delighted to receive initial export enquiries for the Czech Republic and Chile brining a truly international feel to the day

Overall, it was magnificent to see such enthusiasm towards the breed and there were several comments about authenticity and Aberdeen-Angus having the brand advantage. Listening to those attending the Expo there was concern over the future of the beef industry, and questions over the demand continuing. We were well placed to reassure the breeders and finishers that there is more to Aberdeen-Angus than just the premium, and that they are a breed well suited to adapt to any demands put on them, plus to top it all demand is on the increase for genuine Aberdeen-Angus Beef.

It was great to speak face to face to go over facts and figures, discussing the merits and commercial attributes of both the Aberdeen-Angus cow and bull. A huge thank you has to go out council members, Andrew, John and Gayle (she thought she was just coming along for a meeting and ended up staying the whole day!),the younger members and Alec McLaren who joined us for a few hours for their continued enthusiasm and hard work.