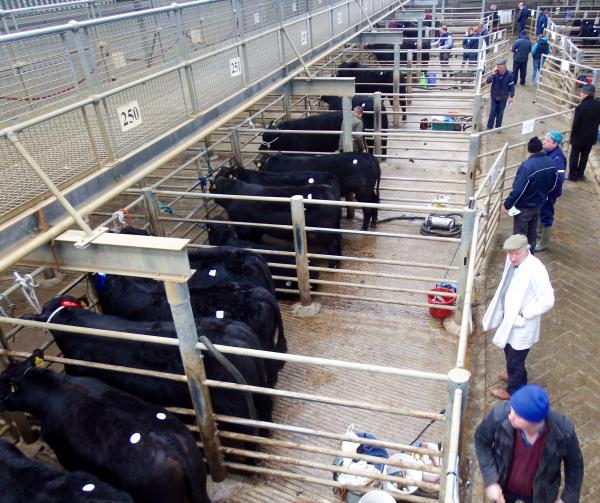 The first of three multi-breed pedigree bull sales at Cillin Hill, Kilkenny took place yesterday with almost 150 beef bulls catalogued for sale. The recent inclement weather conditions did not favour the trade on the day with a clearance rate of just over 50% in the Aberdeen-Angus section at an average price of €2650.

The day’s supreme Aberdeen-Angus champion, Drumcarbin Bouncer S244 (pictured above), exhibited by Shane McKiernan, Lacken Lower, Ballinagh, Cavan, Co. Cavan sold for the day’s best price of €3900. A five star terminal index bull, this one is coming off the very successful Bell cow family at Drumcarbin, which was founded on cow lines from Tom Reynolds’ Knockadrinan herd in Co. Leitrim. With a calving ease figure of just 1.4% (well below the official breed average of 2.19%), this bull attracted significant interest in the sales ring to provide the Drumcarbin Aberdeen-Angus herd with their first sale topper of the year.

Second best price of the day went to John & Kate Tait, Westwood, Rostellan, Midleton, Co. Cork who sold Westellen Fergie S808 for €3700. This double five star index bull is sired by the homebred AI bull, Westellen Diego M734 (WZG) who has sired several notable top priced and prize-winning progeny of late. This one is out of Westellen Flora P764 who descends from the well-known Netherton bred brood cow, Netherton Flora B162.

John McEnroe, Liss, Oldcastle, Co. Meath sold two bulls, Liss Dinky S646 and Liss Majestic S651 for €3000 each. Both bulls were born in September 2016 with the former sired by HF Rebel 53Y and the latter sired by Carton Roe David.

The next sale of pedigree Aberdeen-Angus bulls at Cillin Hill, Kilkenny takes place on Wednesday, April 18th with many five star and easy calving bulls due to be offered for sale.

General shot from the sales ring.